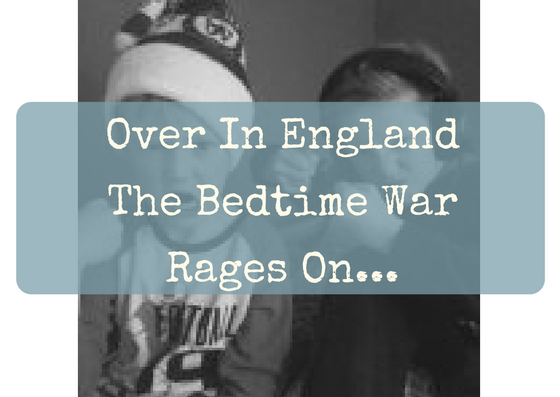 It would seem that my pre-mummy, delusional bedtime dream is shared by a primary school in Wisconsin, America. According to a recent article, this school decided to help parents with bedtimes, kindly providing them with a ‘helpful chart’ outlining suggested times on their FB page. It helpfully outlines times for bed (sleep time) in order to wake up at certain times (wake time) ie. If a 6 year old goes to bed at 7:00pm they will wake at 6:45am.

Guessing the school felt it had to act, probably due to a few kids snoring keeping the others awake, someone somewhere in the school decided to dream up a table and fill it with a load of  times and label it ‘Bedtime Table’.

I am amazed my kids’ secondary school haven’t jumped on this bandwagon and put up a similar one.  I have it on good authority, from my kids, that ‘everyone’ falls asleep in lessons. Now not wanting to wrongly guess it’s the lesson that sends them to sleep, it’s probably due to not getting enough z’s.

Only the other day whilst in school my son was having a quick power nap. However he crucially forgot to remove the banned contraband from his mouth, and suddenly woke to his name being shouted causing a choking reaction as he believed the ‘lump’ in his mouth was in fact a fly! Apparently his relief was immense when he spat it out to find it was in fact his bit of chewing gum.

Anyway I digress, so rather than weep with usual despair at the mere mention of ‘bedtime’ I felt myself having an unusual reaction to this word, it was laughter, reading the table wondering who would actually refer to it, let alone use it!

Over here in England the only FB page we have connected to both my kids’ schools are for rantin sharing important fluffy information, such as recipe ideas for dinner.

The Only In America chart recommends children aged five have 12 hours’ sleep,  I agree and would champion this if anyone was willing to listen at home.

It further advises children aged 12+ need between nine and 10 hours sleep.  I’m assuming that’s for the weekends, in which case mine are thankfully getting more than the recommended amount – clearly nailing that bit.  Sadly, however, on school nights it would seem that unless they are all in bed and fast asleep by 9pm, they will not get the required amount of sleep! The chances of this happening are probably as likely as me finding out Victoria’s Secret!!

A few parents, the kind that every school has, praised the guide commenting “very true I follow this” calling it “awesome”, adding they were going to show it to their kids if they complained.  Wow they must have really easy to scare kids! I can just imagine the scenario here whilst arguing the toss about bedtimes as I whip out this handy chart and the kids all recoil back to their beds. But hey thats just a scenario – the reality would see them laughing and probably throwing it in the bin or, more realistically, the floor space surrounding the bin.

Over on FB the ‘comment here if you are on planet Earth’ remarks such as, “bet there’s not many who live by this table”, “lol thanks for the laugh that is hilarious” and my favourite one “this chart was clearly written by someone who doesn’t have kids or doesn’t live in the real world” add a more realistic view to the post.

I don’t know about anyone else, but if you are one of the lucky few whose bedtimes are a non eventful process, then I envy you.  Bedtimes are an eventful occurrence in our house to say the least! However I often wallow in the proud cloud, that if anything, all of mine could go on to become great hostage negotiators.

Having nothing better to do,  putting our kids to bed is the first step in a long process, with the window of dispute wide open for, ooooh, at least a couple of hours before it shuts.

A lot of wandering around and sudden urges to chat about their day happens only on the stroke of bedtime. Sometimes the wandering is accompanied with a puzzled expression, usually mine, as they don’t have their phone in hand but rather a vague of explanation of looking for something, beyond any description, but crucially adding a few extra minutes to the avoidance of bed.  Luckily for them I am on hand to intervene and assure them I will continue the search for ‘nothing’ once they get to bed!

Not wanting to compare, as there is no actual comparison, I have put together a snippet of a typical evening fighting the bedtime battle and unfortunately can offer no assurance that it gets better as they get older. Our war has been raging on for 16 years – I’ll leave you to work out the chances!

This post was first published here. For more from Everyone’s Buck Stops Here click here or check out some of the recent posts below!

One thought on “Over in England The Bedtime War Rages On….”