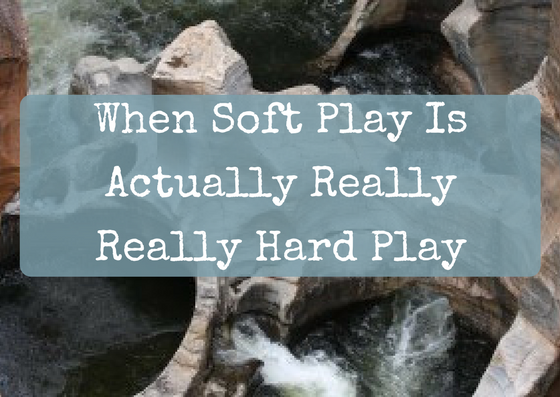 
When I was a boy I was taken to Yorkshire and forced down a hole in the ground in the name of boy-scouting. At the bottom of this hole was a network of smaller holes some of which were being rapidly filled with gushing dark water. I was required to crawl through these holes for a time until eventually popping up back in daylight through the same hole I’d disappeared down originally but much colder, wetter and sadder than before.

At one point we were made to inch our way on our stomachs through a clammy fissure in the limestone called the Cheesepress. It was only about six inches high so to navigate it meant we had to press our little scout noses into the rock. Further on in the complex I plunged towards a stagnant pool fortunately to be saved from drowning by a kindly hand on the hood of my cagoule.

I revisited this sense of emotional ruin recently when I was compelled into the belly of a large soft play area. I had to retrieve my three-year-old who had become becalmed in its furthest reach, struck down by a lack of confidence in his physical capabilities. The soft play was a sprawling structure located on an industrial estate, like every other soft play it seems.

To reach him I had to pot-hole my way along Perspex cylinders, flopping through human mangles and avoiding the many glistering snot-trails. Once we’d been reunited at the heart of darkness we had to negotiate our way back out, the only means of escape being a slide so precipitous I’d have preferred to abseil down it. On a different occasion my wife reached a velocity so great she literally burnt a hole in her sock.

I get soft play, I really do. It allows you to unleash your child into a less perilous, softer world than our own. I’d happily convert my own house into a soft play, somehow creating an entirely squidgy kitchen, with a helter-skelter slide instead of stairs and the opportunity for any member of the family to curl up for a snooze anywhere, anytime.

What really frightens me about soft play is what frightens me the most about the entire parenting experience: other people’s children. I have never seen anything particularly malevolent in soft play, it’s mainly boisterous hi-jinks. But boisterous hi-jinks can sometimes resemble a kind of playful mixed martial arts. In fact with all its netting, soft play is probably the genesis of cage-fighting.

I once watched as my son struggled to ascend the face of a large cushion until another boy comradely winched him up by his arms, basically dislocating his shoulders in the process. I did not intervene, mainly because I am scared of other people’s children, and also because it would have necessitated me removing my shoes. I have a vague paranoia about the toxicity of my socks.

There are three types of soft play parents. There are those who embrace its philosophy, its capacity to swallow up your child for an hour while you remind yourself what it was like to sit down. There are some soft plays that are tacked onto pubs – they’re called things like Wonky Warehouse and House of Maim – which means that the relieved parent can also submerge themselves in hard liquor.

The second type of parent willingly enters the soft play, partly in support of their child and partly because they very much enjoy cocking around in ball pools.

I am in the final band. We stand vigilantly by the sidelines, silently cursing the over-aged trespassers in the toddler section or the children dementedly walking up the slide. We adopt the classic pose of the concerned parent: one hand on the hip, the other reaching up around the neck like we’re gently throttling ourselves. We’re a bit like football physios coiled ready to tend to the injured, but without the holdalls full of smelling salts. Although that might be handy.

The last time we were at soft play, my one-year-old intrepidly ventured into the arena. Touchingly, his older brother attempted to marshal some kind of surrounding safe zone to protect him. He failed. Within minutes my youngest had been inadvertently body-slammed into a crash mat by a rambunctious passer-by. And he loved it. Perhaps I should go away and sit down and drink some more liquor.

This post was first published here. For more from bad dadu click here or check out some of the recent posts below.