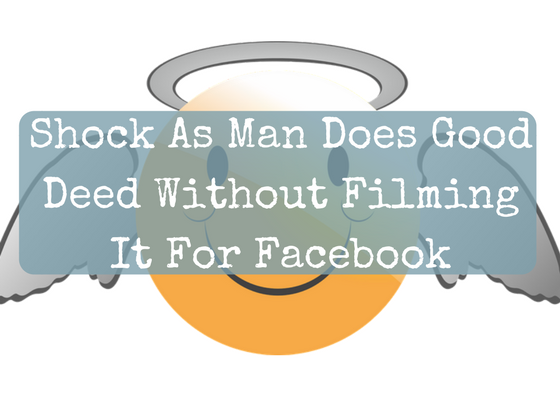 
A man has done something nice for a stranger without filming it for display on social media, a shocking report has claimed.

The astonishing news comes amidst a recent influx of videos on Facebook whereby ordinary members of the public have been doing nice things for strangers whilst recording their good deed for posterity.

We spoke to one such ‘hero’ who had given £50 to a homeless person – before following and filming him for 48 hours to see what he spent it on.

‘It’s so important these days to do nice, selfless acts. The fact that I then film them and post them on Facebook is purely because I want more people to do nice things like I do. It most certainly isn’t because it gets me thousands of new friend requests, a feature in my local newspaper and a TV appearance. I’m just not that kind of guy.

Initially onlookers assumed that when the 38 year old father of one held a door open at his local Nando’s for a mum with a pushchair that he must have been secretly recording it with a concealed body camera. However, it later transpired that he was actually just being a decent human being. Shockingly he didn’t even tweet about the experience.

We have also received unconfirmed reports of a man proposing to a woman without filming it, a woman revealing to her partner in private that she is pregnant and a soldier returning from a tour of duty without an elaborate ruse to capture their child’s emotional reaction for Facebook.

We will bring you more details of those shocking stories as and when we know more.