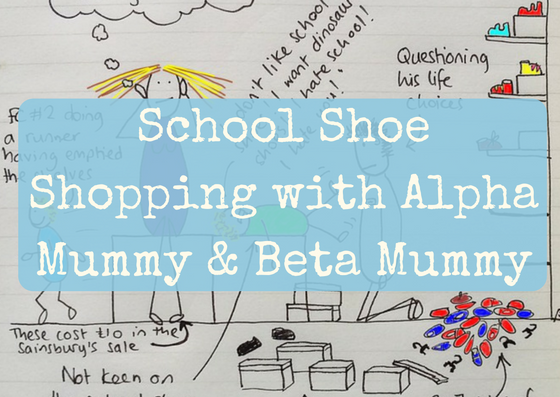 In just a few short weeks, my oldest son (FC#1) starts school.  This marks the start of many new and exciting events, and many stressful and arduous, too.  The worst thing is that this September to September merry-go-round ain’t gonna stop now until, god, around 2031.  “Back to School” this year, for us, is simply “To School”.  For the first time, I am joining parents up and down the country in such joyful activities as stationery-buying (fun!), uniform-trying-on (much less fun), and…dun dun dunnnn…the buying of school shoes.

I recently gave myself a motivational pep talk, pulled myself together and marched FC#1 and FC#2 to the shoe shop.  It was a well-overdue visit, having put it off for months.  But with FC#1’s toes poking out of his trainers, and FC#2’s feet refusing to squeeze into his one remaining pair of sandals any longer, we had to brave it.

It was a fucking nightmare.

Alpha Mummy, of course, would have booked an appointment so that she wouldn’t be faced with a 45-minute wait before even being seen.  She would have made sure that her little angels were well-rested and well-fed so that there was no possible reason for any unruly behaviour.  And she probably wouldn’t have nearly choked to death when she realised that there wasn’t a pair of shoes in the shop below £32.

Reference the Beta Mummy picture below.  That was me, sitting is disbelief as my “darlings” ransacked the shop, screamed blue murder at not being allowed the bright orange football boots (who cares that they didn’t do his size, and he doesn’t play football?), and FC#2 did his best to escape the shop to reach the Bob the Builder ride-on outside Sainsbury’s next door.

You want to know the worst bit about our trip?  We didn’t even buy any bloody shoes.  FC#1 insisted that all twelve pairs that he tried on were uncomfortable.  And FC#2 has such fat little feet that there wasn’t a single pair that would fit him.  Looks like the poor hippo-footed little bugger will have to wear wellies his whole life.

So it seems as though we’re off to buy school shoes (again) next week…wish us luck – and please send wine!

This post first appeared here. For more from Beta Mummy, check out the blog here.