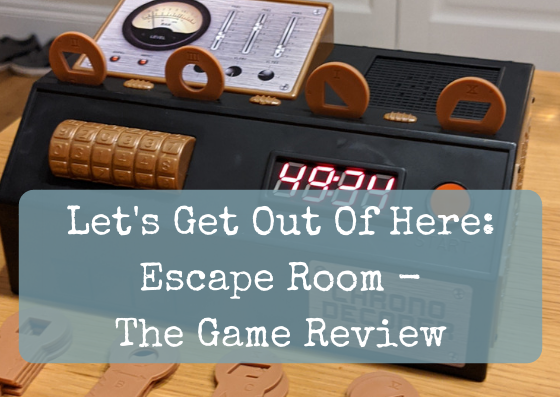 Until last year I had never been to a real-life escape room. There have definitely been a few rooms I would have loved to have escaped from over the years, like the cinema when we accidentally decided to watch Movie 34, but none that were organised in such a way that escape was the planned outcome!

Last year I went to a friend’s Fake Stag do and part of that involved an escape room in a converted tea room near Bath. Other parts involved miniature golf and a hot tub, but I’ll focus on the escape room aspect for now…

Anyway, it was a lot of fun, but we missed out on success by just over a minute. Then earlier this year I had the chance to redeem myself when I went to one in London with Laura and her family and Fran. This time we did a whole lot better and escaped in plenty of time, despite my difficulty in reading a series of numbers up a mannequin’s bumhole.

So with two very enjoyable escape room experiences behind me I set about trying out the play-at-home version – Escape Room: The Game from Goliath Games.

The game is designed for 3 to 5 players, aged 16+ but can be done with just the two of you if you have no friends aside from your other half…

The concept is fairly simple – solve puzzles and find clues to help you escape from a room within 60 minutes. In practice it’s anything but easy, but we’ll come onto that later.

The game comes with three scenarios included, and you can only play each scenario once, because once you know the answers to the puzzles you can’t really play it again. Much like a real escape room really. However, you can buy additional scenarios so don’t think it’s game over once you’ve completed the three included ones.

Instead of having locked doors with codes on like in real escape rooms, the game version revolves around the Escape Room – The Game Chrono Decoder. The Decoder acts as the timer for the game, but also as the ‘door’ because you must insert four keys into the Decoder in the correct order to escape.

The order in which you must insert the keys is determined by the answers to the various puzzles that you have to solve. For each scenario you must insert the keys in the correct order on three occasions. If you put them in the wrong order you will lose a minute from your timer clock, so it’s no good randomly jamming them in and hoping for the best!

The easiest scenario is the Prison Break so we gave that one a go. The plot here is that you must escape from your prison cell within 60 minutes by following the clues left around your cell by a previous prisoner.

To start the scenario you must read the instructions for that game and then open part one of the puzzles. It’s actually a bit daunting at first as you don’t get much guidance to get you started. Once you’ve laid out the puzzles and read the intro you start the countdown timer and crack on with the challenge.

Without giving too much away, there are puzzles such as a crossword and a suduko to hunt for clues in and they will eventually lead you to the correct order of the keys. Fortunately every few minutes you are allowed to open one of the clue envelopes which will help steer you onto the right track if you’re getting stuck.

You don’t have to use the clues if you don’t want to, but we certainly needed them just to help clarify a couple of points. One of the clues even gives you the whole key combination for the first part of the challenge so if you’re really stuck you can use this to move onto part two.

Although you’re only sitting on your dining room table and you aren’t physically trapped in a room the tension does really build as you see the timer counting down. You can also play the atmospheric music from the free app to really ramp up the drama if you want to!

There’s a great sense of achievement when you solve a puzzle but not much time to celebrate as you’re quickly onto the next one. We did manage to solve all the puzzles and escape with just over 3 minutes to spare, but it was pretty tough in patches and we certainly needed the odd guiding clue!

We found the difficulty level of Escape Room – The Game pretty good. The puzzles were hard but not impossible and they did rely on teamwork and good communication throughout which is exactly like a real escape room.

Playing with just the two of us felt fine but perhaps an extra person would have been helpful in certain bits. I think five might have been a bit crowded though as each puzzle is fairly small in size, but I guess you would need to be a lot better at allocating tasks the more people you have playing.

So it’s a big thumbs up from us and something that we will be bringing out at our next house party for those who fancy a mental challenge to accompany the cocktails!

Escape Room: The Game is available from all major retailers at around the £30 mark, including from Amazon (affiliate link below).

For more reviews pop along to our Reviews page.