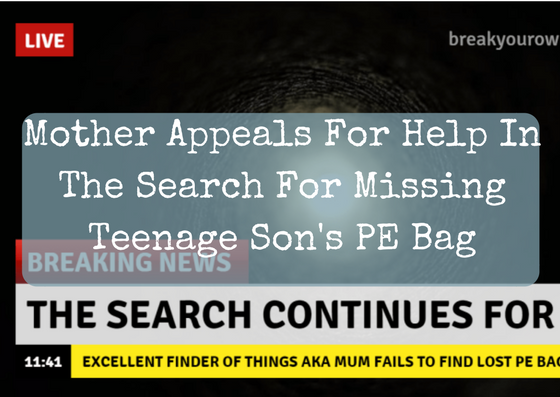 The un-named 14-year-old teenage boy, through no fault of his own, has once again lost his PE Bag.

The missing bag, was last seen on the floor in the Gym.  However, distracted and chatting to a mate upon leaving it’s unclear at this point whether he had his bag on him or not.

A source close to the family said “it’s not the first time this has happened, its only 4 weeks into the term and its happened again”.  There is a missing something nearly every term, and the majority involve his own fault,” he said.

The bag was only discovered missing the other morning.

Totally convinced but with absolutely no clue at all, the un-named teen said it was in the house somewhere.  When ‘somewhere’ failed to turn the bag up he had a lightbulb moment and said actually it was definitely in the car.

Not wanting to hinder the search in any way, he remained seated on his arse eating his breakfast while the search continued.

With the bag not in the car either, the un-named teen appeared strangely shocked when informed.

According to his mum, who is an excellent finder-of-things, this is not the first bag he has lost.

In fact since starting school he has had 3 bags go missing, none of which have been his fault and countless pairs of PE socks.

“Its worrying to think there is an unknown entity randomly taking PE bags” she said.

After a second day of searching, Mr R. U. Kidding returned to the last place his son had it on that fatal day.  All to no avail.

“Unfortunately, my bloody crystal ball wasn’t working that day” said Mrs R. U. Kidding “otherwise I would have known to double check he had it when he got in the car”.

She goes on to recall “He was waiting for me at the bus stop, as he couldn’t be bothered to walk.  It’s not an excuse, but a bloody bus appeared from nowhere and I shouted at him to move his arse quickly into the car.

It always happens doesn’t it, the minute you pull in to stop, a bloody bus like traffic wardens appear from nowhere right up behind you, with the driver telling you to piss off out of the space”.

With rolling eyes her son sighed, adding: “Exactly, I had to rush and you should have checked.  You don’t understand”, he told our reporter “I’m tormented daily by mum repeatedly nagging me to make sure I have my bag, I’ve told her not to keep on.

Already this morning she’s nagged me at least 15 times and again in the car on the way to school I’ve had to put my earphones in to drown out the nagging”.

“I guess what I’m trying to say is she needs to chill out,  it’s not as if I do it on purpose”.

Appreciating her sons sense of humour she laughs shaking her head.

He adds: ‘I am a big appreciator of my parent’s reminders, but mornings are fraught enough with finding the gel for my hair, spraying myself liberally with Lynx Africa and catching up with all my messages”

“After all I’m not the only one who loses bags, everyone does”.

EVERYONE WHO IS NO-ONE

His mother responded, “Who’s everyone?” with no response she continued “It’s about time something was done, clearly these boys aren’t losing their kits, no-sir-reeeeeee clearly someone is helping themselves to them as soon as their backs are turned”.

“It’s such a lottery tossing it in the classroom without a second thought and walking off.  Will it, won’t it be there when they return”.

“This is the danger when I’m not around to do his thinking for him”, things go missing.

Mrs R. U. Kidding appreciates though, that there are boys out there who have been clever enough not to turn their back on their kits.

Mrs. Knott-Mine was asked if her son ever had his kit ‘taken’ she said, “gosh no, he’s responsible and thinks” laughing smugly.

Mr Will E. Learn scoffed “how does she put up with it? there is NO way I would have this”.

Mrs R. U. Kidding hopes this is the last time it happens, but like with all things she lives in hope and dies in despair she adds.

Mrs R. U. Kidding would like to point out that fortunately her son is in no way traumatised by this recent event.  He has no flashbacks or pangs of guilt.  It is after all NOT his fault.

The search for the PE bag(s) continues. They are all of Adidas branding as any old cheap shit will just NOT do.  If you see an extremely pissed off mum in the South East of England searching random places please do not ignore instead an offer to lend a hand in the fruitless search would be appreciated, if only so she can sound off.

This post was first published here! For more from Everyone’s Buck Stops Here click on the image or recent posts below. Unless you’re on Facebook on your mobile in which case you can’t!