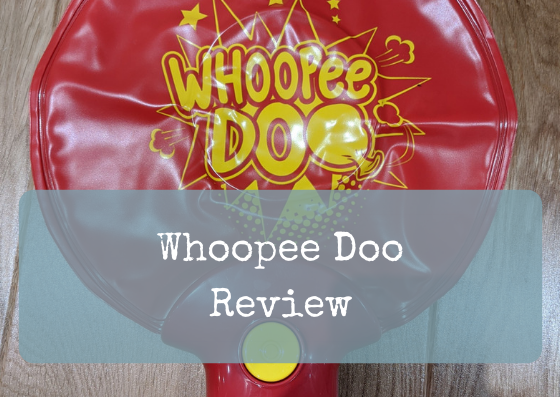 Few things were more satisfying in my formative years that the joy of a whoopee cushion releasing its inappropriate noise under the weight of an unsuspecting friend or family member’s buttocks.

As you can imagine, I haven’t used a whoopee cushion for quite a few years. Until now that is, when we were sent a copy of Whoopee Doo from John Adams to review! Let’s explore…

As you can see, on the reverse of each card there is a number between 2 and 5 and this indicates the number of things you have to name or the number of times you need to say the tongue twister.

Play rotates until the timer runs out and one player is left with the joy of the whoopee cushion deflating under them and a charming fart noise being emitted to the delight of the other players!

All that’s then left to do is reinflate the whoopie cushion and play all over again. Like I said it’s a very simple concept, but the game does make you think on your feet / cushion and it can be quite exciting, especially for the younger ones. And of course you get an amusing farting noise when you lose – what’s not to love?!

Whoopee Doo is available from all major retailers for around £15 including through the affiliate Amazon link below.

For more reviews pop along to our Reviews & Giveaways page!