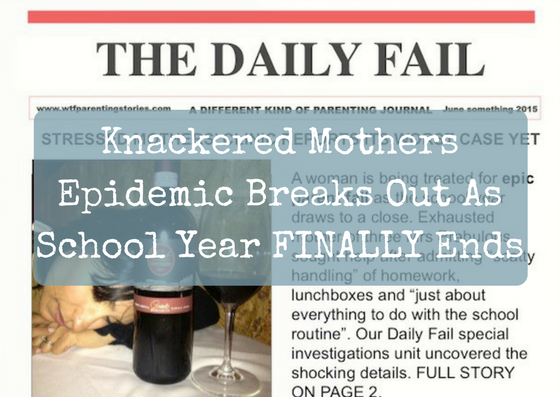 A mother of three is being treated for exhaustion as the school year draws to a close.

Our Daily Fail undercover reporter (posing as a stressed father with Man Flu) managed to obtain a copy of the hospital admissions form containing Mrs Prabulous’s own reasons for seeking help. It makes for sorry reading. Amongst her sins were:

– Failing to check homework folders since May April

Even worse, the pint-sized British Asian mother who lives in a four bedroom house by the sea in Malta (this is the Daily Fail remember…we love to throw in totally irrelevant shit like that and pretend it’s real journalism) confessed that her biggest crime of the school year was feeling actual relief when her eldest went down with a suspected case of chicken pox forcing the whole family to miss a school event. She confessed:

“I nearly did a jig in the middle of the lounge upon realising that I was off the hook having to make entire trays of tandoori chicken for the British table at the biggest event of the school year. Wrong. Attitude. My. Bad.”

said “This is not an isolated case. We’ve actually seen a sharp rise in this sort of case over the last few weeks. It’s not unusual for stressed out mothers to be admitted complaining of lunch box boredom, school project frustration, PTA exhaustion and utter dread over ‘that ruddy stupid new maths long division method’. However, if I’m honest, this is the most severe case we’ve treated so far.

“Mrs Prabulous is not just suffering from run of the mill fatigue. Upon closer analysis, we noticed serious symptoms of general disorganisation and apathy. When interviewed upon her arrival, she admitted she:

– has considered giving her kids a packet of crackers and a jar of nutella between them and “just letting them fight it out in the playground” as she was tired of coming up with lunches that all three would finish.

– resorted to using her five year-old’s Hello Kitty markers to write the children’s names on clothing as she never got round to ordering name labels. Ever.

– got the school start date wrong once leading her kids to miss the first two days of term.”

Mothers at her children’s school have been shocked by the developments.

“We always knew she wasn’t the most organised or involved of mothers but this is a shock” said one who did not wish to be named.

The Daily Fail’s special investigations unit has learned that the clinic was full of mothers repeatedly asking “Is it wine o’f*ckingclock yet?”, clutching crumpled unsigned class trip forms and muttering something about waiting for the bell to ring on the last day of term and collapsing at the finish line.

Doctors have identified the condition suffered by Mrs Prabulous.

It is often replaced by another disorder 48 hours later:

This post was first published here! For more from the brilliant Absolutely Prabulous click on the image or recent posts below!