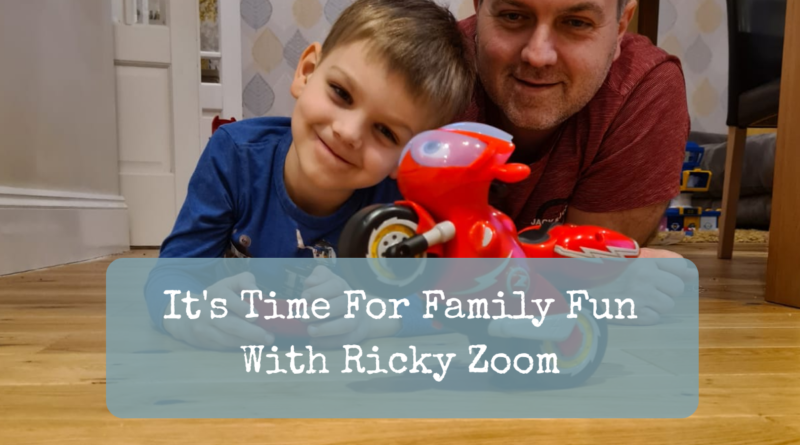 If you don’t have young children or you’ve been hiding under a rock for the past year or so, you could be excused for not knowing who Ricky Zoom is. For the rest of us, Ricky and his friends and family have been part of our lives for quite a while now, having burst onto the cartoon scene in Summer of 2019.

Joshua has been a big fan from day one and has probably watched every episode available at least once. So when we were offered the chance to test out a few items from the excellent collection of Ricky toys as part of the #RickyZoomFamilyFun campaign we were really rather keen!

For those of you who are regular Ricky Zoom viewers (for those that haven’t, watch Ricky Zoom weekdays at 7.40am on Milkshake!) you’ll know that friendship and family are at the heart of every storyline.

Even though Ricky has adventures and solves problems with his Bike Buddies Loop, SJ and Scootio he always knows he has the support of him mum, dad, sister, cousin and all the other grown up bikes of Wheelford behind him if he needs them. He also looks up to his parents as great rescue bike role models and aspires to be just like them when he grows up. Who doesn’t want their kids to look up to them as people they’d like to be when they grow up?!

It’s a feel good series which is aimed primarily at preschoolers but has messages and adventures that appeal to slightly older children too, like Joshua. As such, all of the items below are aimed at children from 3 to 6 years old.

So let’s crack on with the goodies, shall we?

This is the main event of the collection and is where all the action takes place!

As you would expect, the Playset comes with Ricky himself and a variety of ramps and lifts for him to race around. There’s a variety of stickers to help liven the place up, and everything fits together and comes apart nice and easily for storage.

It also comes with a variety of sounds from the show via the press of the big orange lift button at the front which Joshua certainly enjoyed – although to be fair Joshua enjoys repeatedly pressing pretty much anything that makes a noise! There are plenty of features and areas in the set, with a tyre check station, lift and bike launch areas, along with the rotating look out telescope.

It’s a fun set, in Joshua’s favourite colour orange and is a good starter for any young Ricky fans out there.

It’s priced at just under the £40 mark and is available from all good retailers including The Entertainer.

As we know, Ricky’s family are a really important part of his life, so it’s only natural that he would want them all to join him in the real world too!

This set comes complete with Ricky, his sister Toot and his mum and dad, Helen and Hank. Each model is nicely detailed, and feels sturdy and well made. They’ve all been designed with chunky wide wheels so can stand up quite happily on their own, which is a nice feature.

The front wheel can also be moved from side to side making it easy to steer the bikes. The Family Pack currently retails for around £22.99.

This remote controlled Ricky was our favourite item from the collection. Joshua is a big fan of RC vehicles and this one is good fun and very simple to use for younger users.

The remote control itself has just the two large buttons, so you really can’t go too far wrong!

One button sends Ricky forward and the other spins him around whilst doing a wheelie. There is no reverse, so it does take a bit of getting used to as you’ll need to get your spinning well practised to keep him going the direction you want, but Joshua got used to it pretty quickly. Here is Ricky in action:

It’s easy to use, feels well-built and sturdy and will keep younger users fascinated for quite some time. It retails for £29.99 from all good retailers.

The final two items in the collection we were sent for review are the perfect stocking filler for every little Ricky Zoom fan. The range includes all of the Biker Buddies, complete with their own range of accessories and perfectly completes the House Playset. Your Ricky fan can act out various scenes from their favourite show or come up with their own adventures with these Biker Buddies.

Like with the Family Set above, these bikes can stand up on their own and also have adjustable from wheels. The best part is that they’re available from £6 so won’t break the bank as we approach the festive season!

As we head towards Christmas, as well as spending time with our loved ones it is also a chance to think of people less fortunate than ourselves. This is why Ricky Zoom is supporting leading children’s charity Barnardos this Christmas with its Barnardo’s Kidsmas Toddle with Ricky Zoom. There is nothing more incredible than children helping to support other children who need their help. Visit https://www.barnardos.org.uk/bigtoddle for more details on this Zoomtastic fun event.

Don’t forget you can check out the whole range of Ricky Zoom toys at The Entertainer and catch Ricky Zoom weekdays at 7.40am on Milkshake!

For more reviews check out our Reviews & Giveaways page.