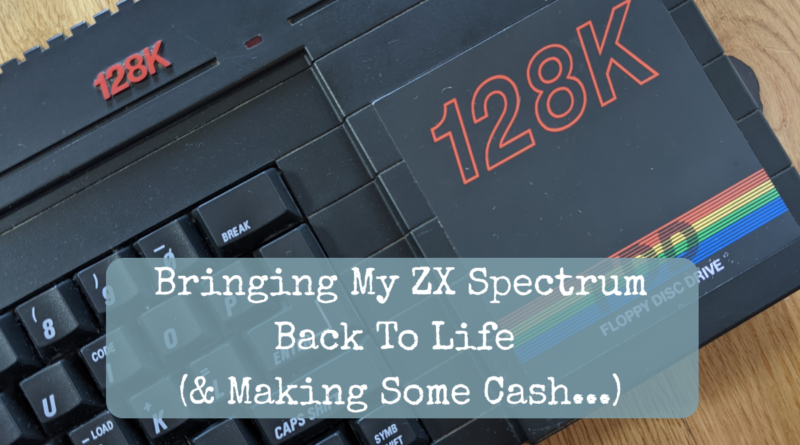 Whilst having a bit of a clear out of my parents’ loft recently I came across two of the main things that occupied the time of late 80s / 90s me – my old Spectrum and Amiga.

Along with listening to music I spent a fair bit of time in the smallest bedroom at my parents’ house playing some classic adventure, sport and simulation games and remember those games being awesome!

It all started when I was maybe about 8 and one of my school friends had an old rubber keyboard 48k Spectrum at his house. Yes, the games weren’t great by today’s standards but I would occasionally pop round and play on it with him.

We would sit there waiting patiently for the games to load, amidst a cacophony of colourful lines on the screen and screeching noises and occasionally one would work and we would hammer away at the rubber keyboard like our lives depended on it. They were happy times!

So as Christmas approached I dropped an extensive series of not particularly subtle hints that a Spectrum was top of my list for what I wanted from Father Christmas that year!

I was generally quite persuasive as a youngster as Christmas was approaching. I would look through magazines and research the facts and figures about the thing that I wanted. I would circle the item in the catalogues and spend every waking hour telling my parents how great it was, and what it could do, and what I could do on it and generally how my life would be incomplete without it.

So it came to pass that my wishes finally came true one Christmas and for a combined Christmas and birthday present (my birthday is on Christmas Eve) I was given a Spectrum and little colour TV to go with it. Not just any old Spectrum either – it was the all-new super-exciting 128k +3 with built-in disk drive!

Instead of having to wait ten minutes for a tape game to attempt to load, and then fail at the last second, the built-in disk drive meant that games would load in seconds. Seconds! Admittedly the games were exactly the same as the tape versions but still – it was a revelation!

Of course, the disk games were more expensive than the tape games, and not every game made it to the disk format at all. So despite having a magical +3 I still had to attach a tape player to it and wait ten miserable minutes to play most of my games all the same.

For those who never experienced the glory of the Spectrum tape loading extravaganza here is a quick demo for you.

There were a few stages where a tape game could fail. After the first set of screechy noises the title should appear on the screen. If it didn’t it had failed.

After each set of screeches, the lines should go blue and yellow. If they don’t, it’s failed.

If the lines disappeared completely – failed.

If the preview screen never appeared or looked even worse that it was meant to – failed.

If the tape ended and nothing had loaded – failed.

If you became so frustrated that you stamped repeatedly on the tape before chucking it from the window – failed.

Sometimes it would even put you out of your misery by telling you, with the dreaded message – R Tape loading error.

Quite how any Speccys survived the 80s without having been thrown against a wall repeatedly is one of life’s great wonders. Probably explains the reason why they can be quite expensive to buy on eBay these days!

However, it did teach me patience, resilience and anger management, which have come in very useful during 2020.

Anyway, back to the start, and I had just found all my old Speccy and Amiga stuff in my parents’ loft, having been safely stored there for around 30 years. We had debated binning the lot over the past few years, but this time I actually checked if any of it was worth a few quid on eBay.

To cut a long story short, some of it is worth a few quid on eBay! Hence one of our spare bedrooms is now filled with dusty old tech from the 80s which I’m gradually testing and selling off.

Getting A Spectrum Working After 30 Years

The testing process wasn’t quite as easy as hoped though. First up there was the joy of trying to get 80s tech working on modern TVs. A bit of Google research and a few quid later I had a funky cable that goes from a Speccy to a SCART connection on a TV. Perfect.

Next up, was powering up the Speccy to see if it still worked after 33 years of hibernation. Miraculously it did!

Unfortunately the keyboard was apparently dead. Various YouTube tutorials later and my Speccy was in pieces in front of me on the floor. A quick brushing off of 35 years of crap and the keyboard was back to life. Result!

Now that the keyboard worked I could successfully move the cursor and quickly identify the next issue – namely that the disk drive was also dead. More frantic YouTube searching and more unscrewing of aforementioned Speccy and the problem turned out to just be a perished drive belt. Perhaps not surprising after 30 years in the loft and supposedly a very common fault.

£3 spent on a a new drive belt, a few days for it to arrive and a decent bit of fiddling to take the disk drive apart, remove the remnants of the decayed belt and pop the new one on and the disk drive was also back to life. Yay.

I was feeling pretty damn pleased with myself at that stage, having brought my Speccy back from the grave with nothing more than a small screwdriver and a £3 rubber band and I was good to go with the actual game testing stage.

Bizarrely, it turns out Spectrum disks are really rather reliable even after 30 years in storage and every disk game worked first time. Unlike the bloody Amiga disks but that’s a story for another day…

Anyway, my memories of my Speccy days in the 80s involved amazing games with decent graphics, catchy tunes and awesome gameplay. So when the 2020 reality turned out to be generally four colours moving in a juddery fashion across a screen to the backdrop of beepy noises the illusion was somewhat shattered!

Obviously technology has moved on a little bit in the past 30 years, but I can’t imagine any child these days having the patience to wait for a game to load for ages and then being rewarded with the most basic of graphics and sounds effects.

It’s a completely different world, and I can tell Joshua was looking at it wondering what the hell was going on! Here are some examples of the cutting edge 80s graphics…

Long story short, they went really rather well, especially those listed to finish on a Sunday evening and those that were reasonably ‘rare’. In total across the 30 games I’ve sold so far I’ve made around £900. The highest one went for a ridiculous £98. Ninety. Eight. Quid. Here it is that wonderful game in all its glory.

To be fair it was one of my favourite games back when I was 9, and the music is genuinely pretty catchy, but even I wouldn’t have had the balls to ask my parents to fork out £98 for it!

If you want to sell off your old games, or your old computer here’s a few tips:

Pick your time – as with most eBay auctions it’s best to time the auction to end when most people are online, so between 7-9pm each day, but particularly Sunday evenings seem to go well

If the game works say it works – if you are able to test a game / computer and it works make sure you include that in the title!

Do your research – on the eBay desktop version you can search for the game you want to sell, choose ‘Sold Items’ under the ‘Show Only’ sidebar menu and it’ll tell you how much your game last sold for. From there you can work out if it’s worth putting a high reserve / high start price / buy it now price.

You can also search for something generic like ‘Spectrum games’, sort by price and it’ll show you the most valuable recent sales. You can see a few on this article.

The whole experience has been quite fun, and fairly lucrative, so if you too have a loft full of old tech at your parents’ house it’s well worth a nose through. Just don’t expect it all to be quite how you remembered it…

For reviews of somewhat more modern toys & games check out our reviews page!