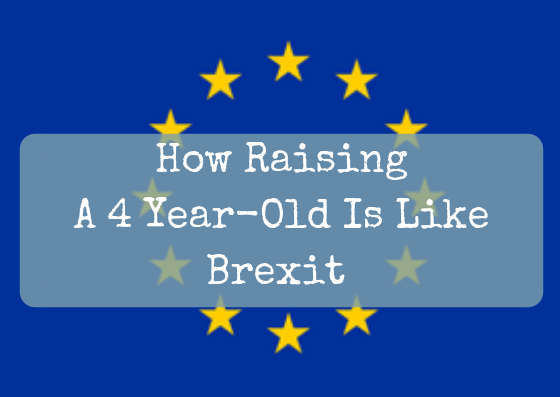 Having followed quite a lot of the complexities of Brexit over the past few days it occured to me how similar leaving the EU is to bringing up Joshua.

Yes, I know it sounds pretty tenuous, but stick with me, for all will become clear in mere moments. Looky looky…

It Drags On A Bit

As fascinating as the whole exciting exiting experience has been, it feels like it’s been going on for most of my adult life.

However, even this epic journey pales into insignificance when compared to the amount of time that appears to pass when you’re playing shopkeepers with a 4 year-old.

‘Daddy, you need to come to my shop and buy some food’

‘Daddy, now you need to take it to your house’

*takes food to other side of room*

‘No, Daddy. Your house is in that room’

‘Right, Daddy, now you need to eat the food’

‘Are you eating it, Daddy?’

‘I can’t see you eating it’

‘Probably because I left the room. As requested.’

‘Oh yeah. Have you finished eating it?’

‘OK, Daddy, now bring it back to my shop’

‘OK, Daddy. Now you need to buy some more food’

Everything Relies On A Deal

Making a deal is one of the key bargaining tactics in parenting a 4 year-old. And unlike the withdrawal agreement, sometimes parenting deals are actually successful. Even if they are subject to compromise and multiple iterations…

‘Josh, can you put your uniform on, please?’

‘Josh, if you put it on now I’ll let you watch a bit of that bell-end, Blippi, on the TV before school’

*contemplates action but decides against it*

‘Josh, if you don’t put your uniform on we’ll be late for school, and Miss Leverett will be sad’

‘Joshua. Put your uniform on now or I’ll throw the TV in the bin, take you to school in your pants and you won’t go to the party at the weekend. In fact you’ll never go to a party ever again. And I’ll throw all your snacks away too.’

*puts uniform on at pace of a particularly lazy sloth*

Random Arguments About Literally Everything

ORDER. ORDER. ORDERRRR! As you may have noticed, there’s been a bit of difficulty in agreeing to anything in parliament over the past few weeks / months / years. Even ideas that seem well-liked one day are completely rejected the next day.

It’s the same when parenting a 4 year-old. On Monday we had a lengthy disagreement because Joshua didn’t want to exit the bath. Apparently he loved baths to the extent that getting out would have pretty much ruined his life.

On Wednesday we had a lengthy disagreement because Joshua hated baths to the extent that he would only put one leg in before deciding he really couldn’t stay in any longer.

The Only Decision Is Indecision

We kind of know now what MPs don’t want – a Brexit deal, a no deal Brexit, alternative deal, confirmatory vote, 2nd referendum, or revoke article 50, but we don’t yet know what exactly they do want.

It’s similar with a 4 year-old. So far this week we know that:

Quite unexpectedly, leaving the EU seems like quite a complicated task. Coupled with the fact that parliamentary processes are a mixture between fascinatingly archaic pomp and circumstance, hundreds of years of precedence, 500+ completely competing viewpoints and a man in a big chair wearing an awful tie trying to keep everything on track, it can be hard to follow at times.

It is therefore easy to draw comparisons between Brexit and the minefield that is a 4 year-old learning to read and write. Jolly phonics, for example, appear to be about as jolly as ramming a hot poker up your bumhole.

Of course, depending on when you personally learnt to read and write, it will either seem complete jibberish, partly jibberish and slightly jibberish.

The comparisons are obvious.

Although, to be fair, that is rather to be expected of a 4 year-old.

So there you have it. Conclusive proof that Brexit is pretty much the same as raising a 4 year-old.