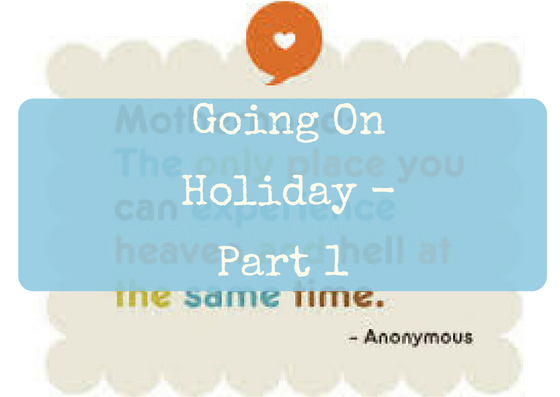 This summer, the monster family had a holiday booked. Just the four of us. For seven days. Mummy, Daddy and two boys with no interruptions, intervals or other company for light relief/ informal therapy. No babysitters, no voices of reason, nobody but just us. Fun fun.

I was excited, of course I was. I was excited to get a tan. I was excited to… ummm… not cook or load the dishwasher for a week. I was excited for Husband Dearest who was excited. And then I was all the other emotions that exist. Panicked because the world is in a scary state at the moment and what if we were one of the unlucky ones who didn’t make it home? Nervous in case Monster Minor grew twat features on the plane and screamed his head off for four hours or chose take off to show off that he’d learned the word ‘bomb’. Apprehensive because of the smattering of Trip Advisor reviews that said our chosen 4* had cockroaches, rats, shitty food and that they’d caught typhoid/dysentery/bubonic plague from it. Self-conscious because I can’t say ‘I’ve just had a baby’ but my body looks like I’ve just had a baby (like 20mins ago – I have the undereye bags and everything). ‘Generally a bit terrified’ is how I’d say I was feeling prior to leaving.

Several weeks of packing in advance, my homemade ‘mug-proof’ device securing our passports into my hand luggage, telling Husband Dearest for the 15th time that unless he’d given it to me when I asked him a week ago, no his belt would not be packed, and we were good to go! Just a 3.15am get up to get through before we could leave. But that should go smoothly, all was set for the off, children were to bed early, house was organised. And smoothly it did go, up on time, suitcases tetrissed into the car, boys awoken and strapped in – excited but not springer-spaniel mental. As close to perfect as could be. Just locking up to go.

Closing the door, locking it and walking away with no drama. Something Husband Dearest had been trusted with many, many times over. And had been successful in many, many times over. Unfortunately, that morning, at 3.37am, was not to be one of those times. As I watched Husband Dearest hover over the alarm box as he began to pull the door closed, I thought it odd. We have cats, we can’t use the alarm. So when the piercing shriek and flashing blue light of the alarm on the front of the house began, I was bewildered. Why the buggery fuck bags had he chosen now to attempt the alarm! Now!? Of all times!? Repeated remarks of ‘Dat noise!?’ and ‘What’s Daddy doing?’ from the Monsters and images of opening and then closing check-in desks, I began to get a little concerned. Husband Dearest was disappearing in and out of the house, furiously stabbing at numbers and muttering expletives. I got out of the car, glancing nervously at the alarm keypad, willing it to STFU and shouting alternative, non-plane-missing solutions to Husband Dearest. By some sweet miracle, the alarm stopped. Husband Dearest got in the car and explained to me that he wanted to pretend to put the alarm on as a burglar decoy, but then his finger slipped. FFS.

Fast forward an event-free journey to the airport, a 15-hour delay scare (and several angry/angsty/jumping to conclusions texts to friends and my Mum)and a fast-tracked journey through security (cue Husband Dearest declaring we will never come on holiday without a pushchair and queue like peasants, ever ever, about 13 times in twenty minutes), and we were air-side, relatively unscathed. I won’t count the wails of Monster Minor when the security men took Pony off him to go through scanner. Though, in fairness to the security team, if I was going to smuggle anything, I’d choose a white and pink plush pony handbag in which to do it. And, in fairness to the security team, Monster Minor did look pretty suspicious clutching it with all his might.

After stocking up on far too many Boots £1 sandwiches (‘we are NOT paying aeroplane prices for aeroplane crap!’), we discovered that the blessed folk who planned Terminal 2 included a free soft play. God bless those angels. Things were shaping up not too shoddily!

All in all, in spite of my reservations, things went ok. Monster Minor fell asleep through take-off, giving me the opportunity to stick stickers into the extortionately overpriced and incredibly mind-numbing Paw Patrol magazine with Monster Major. I balanced my guilt at using the iPad as behaviour management by giving the Monsters fruits and seeds as snacks, which, remarkably, they didn’t throw at each other/the other passengers. The ratio of fighting:entertainment that the magazine freebie plastic crap brought, weighted in favour of entertainment. And Husband Dearest even managed a nap. Winner winner chicken dinner. I’d go as far as to say, I could’ve dismounted the plane feeling smug. I didn’t. But I could have.

This post was originally published here, on the excellent blog A Reluctant Mummy. For more from this blog, have a look at the recent posts below!