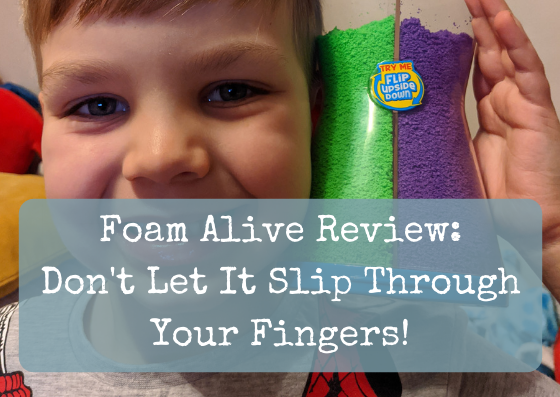 Christmas may be over for another year but that definitely doesn’t mean Joshua won’t be wanting to spend all of his free time playing with new and interesting things when he goes back to school next week!

Now before even opening the box I can officially declare that Foam Alive from Character is definitely interesting! If you don’t believe me, just look at it, doing magical things whilst still in its very own home:

Anyway, I’m skipping ahead a bit.

We were gifted the Foam Alive Double Flip Pack which is the two colour version, with rather fetching shades of purple and green, both contained within a useful storage tube. The idea is that once you’ve finished playing with it for the day you can tuck it back away for another day.

Now I guess technically you could just pour both colours out onto the table and let them mix together, but as the very thought of that fills me with dread and terror ‘we’ decided to keep the colours separate.

The storage container is really useful but the only difficulty we found was trying to just get one colour out at a time, as the two compartments are covered by just the one lid. As such, once it’s off it’s hard to pour out the colours separately. Not the end of the world as you can hold your hand over one side but something that could have been easily avoided by having two lids we thought!

As we discovered, you can use Foam Alive to make shapes and patterns and then gather it all back together into a mound, or ball, or sausage or whatever takes your fancy. But that’s the kind of thing you can do with any other modelling clay / sand etc. The real unique feature of Foam Alive is that it looks like it’s, well, alive!

It’s actually strangely satisfying watching it come to life and pour through your fingers. I’m not going to hypothesise or calculate or research exactly how it works, but I’m pretty sure it’s some form of magic. Just. Look. At. It.

Pretty cool right?! Joshua played with it for ages, making patterns and, for some reason, pancakes.

He loved watching it come to life and did a pretty decent job of not getting any on the carpet in the process! Fortunately we also discovered that it’s pretty easy to pick up from aforementioned carpet as it doesn’t stick to it so it’s just a matter of scooping it back up.

The other major benefit is that it never dries out, so even if you don’t pack it away at the end of the day you’ll still be able to use it again the next day, without fear of it going stiff and lumpy. Perfect!

The Foam Alive Double Flip Pack is designed for ages 5+ and retails at around the £10 mark so it’s not exactly going to break the bank. It’s fun to use, doesn’t make a mess, and is just genuinely pretty cool to look at and play with, for children and adults alike 😬😜