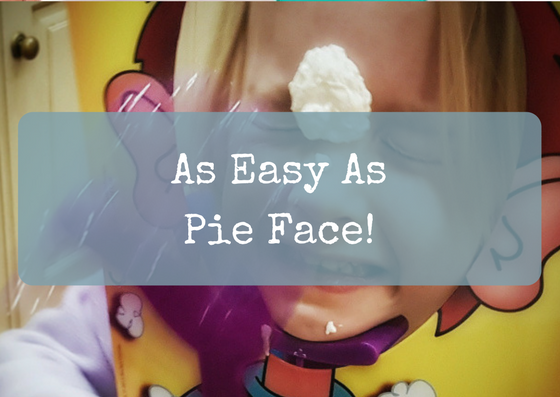 In which our reluctant hero meets The Phantom Flan Flinger. Or something.

The little people very nearly got a game called “Pie Face!” (or “Pie Facebook!” – thanks, autocorrect) for Christmas.

OK, “very nearly” is a slight porky pie. The game was certainly in our house on Christmas Eve. Having completed his fifteenth trip down from the distinctly attic-like magical elf toy factory, Father Christmas sat down with Mrs Claus and inspected the box.

So, unwrapped, it was banished to the attic, never to be seen again. Forgotten forever. Like Ceefax, Top Gear, and people turning up on time.

But the elves had other ideas…

At some point between Father Christmas going back to work after the holidays and last weekend, Pie Face! mysteriously reappeared.

By Sunday morning, calls for the overpriced, plastic, harbinger of doom and disaster (probably) to be assembled hit fever pitch. Ah, go on, go on, go on…

Having long since lost his festive “Ho, ho, ho!”, Santa held out for about an hour before resorting to that last desperate act of a broken human grown-up(ish) man desperate for five minutes peace. You know the one.

For non-breeders, and those who managed to keep their offspring away from Nick Jr or YouTube for the last year, Pie Face! is a simple game for simple people. It works like this.

(One for the kids there…)

Pie Face! does exactly what it says on the tin. Sadly it isn’t a game of calculating the circumference of a round-faced person’s face by multiplying its diameter by Pi, as I had initially hoped.

Being about to be hit in the face with a pie is the perfect metaphor for modern-day parenting. You live in constant fear that something bad is going to happen and know that, in the blink of the eye, there will be chaos, tears and a shedload more clearing up to do.

With the pie-flinging machine assembled on the kitchen table, it was almost time for launch. But like an empty crust in a dentist’s chair, the pie needed a filling.

The options were a wet sponge – most likely unpleasant but not that messy – or squirty cream. There’s nothing quite like the smell of decomposing dairy products to remind you of a happy Sunday morning, so we went with that.

Pie loaded, there was no going back. Well, maybe there was. Mum was up first. Fortunately, I’m not quite as stupid as I look.

In no time Pie Face! had delivered. Mum was covered in cream, the kids were in stitches and I was the proud owner of an amusing GIF of a fun family moment, preserved for future generations. Or to be used in an emergency social media post. Whatever.

The kids were next up, and they loved it… right up to the point where they got splatted in the face with a pie.

This, unexpectedly, took an age to happen. There was no SPLAT! during the first round of play. Our eldest dodged a covering with her first spin of round two also. By this point the tension was greater than Derren Brown playing Russian Roulette with a loaded gun on live telly.

Either me or the boy were getting it next spin. It was bound to be me. Or was it?

Another round, another five spin bullet dodged by me. It was time for our daughter to get one in the eye.

And that cue brought an end to the day’s play. No tears, a surprising amount of fun, and only one minor issue.

“Daddy. We don’t like the cream. Can we use the sponge next time, please?”

A Tip Top response. But a few days later, it was seemingly back to square one. Pie Face! was back out. So was the squirty cream. The children were there, obviously, but they looked like they had something to say.

And then it came. An unexpected Emergency Motion. Blimey.

An amendment to the rules was being proposed. An amendment that, yes, we would all play Pie Face! but only mummies, and daddies, were allowed to put their heads through the hole to get splatted. With cream.

An interesting twist, but like a badly aimed splat, it was, sadly, just pie in the sky.

This post was first published here on the very much underappreciated Babysitting The Kids. Go check it out. I did, and I didn’t completely hate the experience.