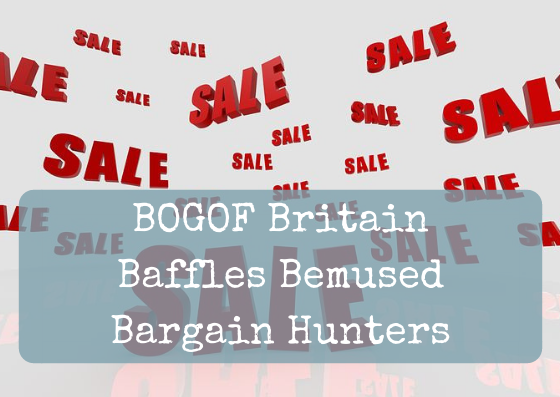 Millions of Britons enjoy the thrill of the Buy One Get One Free, affectionately known as BOGOF, offers at their local supermarket but an influential government think tank is calling for them to be banned amidst a deluge of complaints from bewildered shoppers.

Research has shown that some shoppers are so overwhelmed by the thrill of BOGOF deals that they are left with a house full of unwanted items, seemingly powerless to resist the thrill of the deal. We spoke to some shoppers at the Reading branch of Morrison’s and were shocked by some of the stories we heard from disgruntled penny pinchers.

Anna Spanner, 19, from Oxford Road, told us that she had recently fallen foul to a ‘too good to be true’ offer. ‘I went in to buy food for my 5 children but as I was walking towards the frozen fish finger aisle I saw an offer on dog food. It was buy one get one free, so I thought I would save some money, as things are a bit tight. I picked up 98 cans and made my way home.’

It was only when Anna got home to her 1-bed flat that she remembered she doesn’t actually own a dog, and now had no money left for the month to feed her children. ‘I really felt like I’d been tricked she said. Not once did the girl on the till ask me if I actually owned a dog. The bastards even helped me carry it to the car.’

Anna has since been forced to buy a dog so that her purchase doesn’t go to waste and plans to sue the supermarket for the distress caused to her and her children.

Another bargain hunter, Danny Fanny, 32, from Slough, told us that he couldn’t resist an offer on Strawberries at his local shop. ‘The strawberries looked lovely and were on offer at buy two for £3. They were going pretty fast, so I thought I’d grab myself a real bargain and pick up 15 packets as times are hard and it would be great to buy enough strawberries to last the whole Summer and only pay peanuts for them’.

To Danny’s horror, after just one week, the 14 packets that he had yet to eat had turned blue and squishy. ‘I was blown away’ he told us. ‘No one in the store told me that strawberries don’t last all Summer – I feel cheated and let down and something needs to be done about these charlatans.’

Local toddler breeder, Denise Menise, was delighted when she saw a BOGOF deal on nappies at her local ALDI. ‘I picked up 20 large packets of 36 nappies for my little one and calculated that this would last me 1 year, based on 2 nappies being used per day’, she said. ‘Unfortunately they only had them in size 3, but my daughter, Candice Bernice, is a size 6, so I now have to sellotape two nappies together to make them fit. It’s not such a bargain now I think about it, as I now use twice as many nappies, and all the poo and wee falls through the middle, which is quite annoying.’

The final customer we spoke to, who doesn’t want to be named for legal reasons, took advantage of an offer on condoms but soon lived to regret it. ‘I saw the red sticker on the shelf by the condoms and couldn’t resist the temptation, so bought 20 packets’, said the 22 year old, from 19 Open Close. The mystery male, born 22 March, 1993, said he got home later that day and, to his horror, looked in the mirror and remembered he was incredibly ugly. The man, known to his friends as Dave, said ‘to think they would have sold that many condoms to someone with as little chance of ever using them as me is a breach of my human rights.’

Professor Mark Mywords, from the Institute of Curtain Studies, told us ‘Although I know more about window dressings than bargain hunting, it is clear that supermarkets need to do more to educate customers about the dangers of BOGOF deals. Perhaps such offers should be hidden out of sight of stupid customers, maybe behind a curtain, and if such a customer wishes to see those offers he then needs to call a member of staff to assist him in making a sensible choice. It isn’t fair to expect a customer to have to make their own choices.’

It is clear from these harrowing tales that more needs to be done by the grocery industry to mitigate against the perils of BOGOF deals, but for now, here are our top 5 tips to help you avoid the pitfalls: