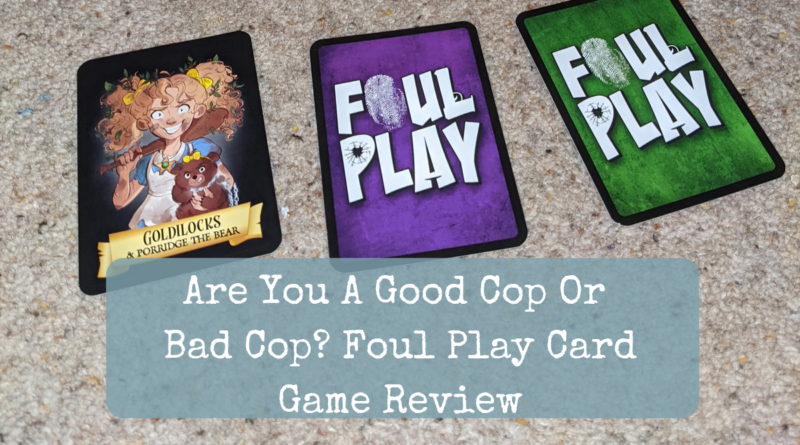 Options for family entertainment have been somewhat limited over the past year or so, as you may have noticed. So when something a little bit different pops up that you can play at home or on the go it’s worth giving it a good go!

Hence why we were more than happy to try out our detective skills with the new pair of murder mystery card games from Foul Play Games.

The observant readers will have spotted that there are two variants of the murder mystery theme to try – The Manor House Murder and Once Upon A Crime.

So far we’ve tried out Once Upon A Crime, which is released for general sale on 1st July 2021. This version is based upon the rather unfortunate occurrence of a murder taking place in Storybook Land. As you may predict, the suspects are all famous characters from fairytales, including Joshua’s favourite, Sinbad!

The suspect cards are full of little details that are crucial to helping you solve the crime. So, for example, if the murderer was Sinbad these 3 evidence cards, which you may come across during the game, will lead you to him.

Right, enough cute photos of Joshua holding cards – how do you actually play the game? In all honesty it takes a few reads of the rules to get your head around it, but once you get the concept you’ll be fine.

Basically, you have 3 types of evidence cards and you have to pick one of each type of card at random to be part of the game. This combination of 3 random cards will lead you to the killer based on the description given on each evidence card. Therefore if you picked 3 different cards at random it would lead you to a different killer, so each time you play the game the murderer will be a different person. Make sense?

So you pop the 3 random evidence cards in the deck and mix them in with the other types of cards and then dish out 5 cards per detective. The evidence cards you don’t randomly pick are out of the game. You also crack out 9 cards in a grid formation on the table and pop the leftovers in a pile. It looks a bit like this.

Players take it in turns to use one of their cards, complete the action on the card and then take a new card from the leftovers pile, with the aim being to find all 3 evidence cards and work out who the killer is before the other players. To win you need to have seen the 3 evidence cards and also have the killer’s character card in your hand to accuse them. If you get it right you win. If you get it wrong you’re out!

With the Bad Cop variant there are a lot more cards in play, as all evidence cards are part of the game. To succeed in this variant you need to have 3 evidence cards and a killer’s picture card that ties in nicely with the 3 pieces of evidence in your hand.

As you can imagine from my amazing summation of the game above, the tricky part of the game is getting hold of the evidence cards and the character cards, so you’ll spend a lot of time trying to steal the relevant cards from your opponents, whilst they try to steal them from you!

Like i said, once you get your head around what you’re doing it’s great fun and there’s a lot of genuine entertainment in trying to get hold of what you need from your opponents. It’s fast-paced and once you get used to it, it’s also pretty simple to play.

There’s no board to set up and nothing to build or any big lumps of plastic to cart around with you, so it is genuinely a game you can take with you anywhere and whip out when you fancy 30 minutes of fun with your friends or family.

It’s designed for 2 to 5 players, aged 8 and above and whilst it can definitely be played with just 2 people it’s more fun with one or two more I think, as it takes a bit more skill to choose which player to steal from etc. In terms of age, we found the content to be fine, but we did take a few reads to nail the instructions, so my advice would be to make sure you know what you’re doing before you get the kids involved!

Each game sells for a smidgen under £9 and can be bought through the Foul Play website. There are also playing guide videos online in case you can’t get your head around the instructions first time around – ideal if you’ve had a few celebratory drinks after watching England beat Germany, for example…