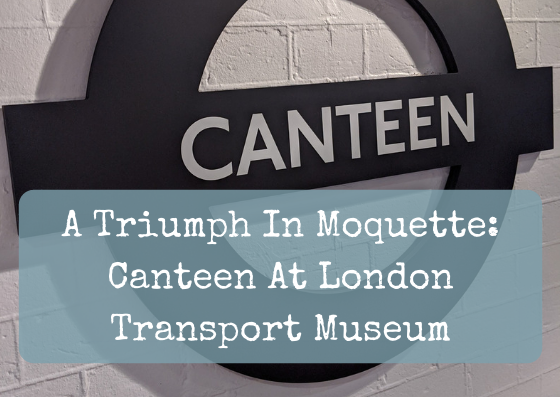 It pains me to admit that despite Joshua having been there, and loved it, I’ve never actually been to the London Transport Museum myself!

Given I’m quite partial to some relics from days gone by, myself included, and given I work at one of the UK’s busiest transport hubs, when I heard the London Transport Museum were relaunching their eating space it sounded like somewhere well worth a visit. And not just for the promised free cocktail 🍸🍹

For those that haven’t been, London Transport Museum is situated right in the heart of Covent Garden in London. As you walk into the main entrance you are straight into the shop, and one flight of stairs up is the newly-refurbished and refocused eating space, Canteen.

As you would expect from London Transport Museum, Canteen is decked out head to toe in transport-themed memorabilia and styling. It’s about as far away from being a bland, boring space as you could imagine!

There are Metro tiles and Moquette fabrics oozing from every pore, along with an impressive selection of genuine disused signage and lighting. The design even includes wooden benches that were found in the basements of Wembley Park and Gloucester Road stations as well as salvaged luggage racks from the 1960s.

The launch event itself gave us the chance to try out the two transport themed cocktails along with a variety of taster dishes from the new menu, provided by Benugo.

Speaking of cocktails, here they are in all their glory – the Routemaster and the Elizabeth Line. See if you can work out which one is which from their colour schemes 😜

Even the trademark roundel ice added a certain something to what were two very pleasant cocktails. Pleasant enough in fact that we both had three of them, although as Sarah was driving she moved onto the mocktails after the first one!

I’m slightly biased when it comes to the food we tried as I love tiny plates of lots of different food, rather than one big meal. Still, each dish was actually really tasty and out of the 8 different dishes we tried I’d happy eat them all in their full form. Aside of course from the chocolate brownie which was filled with nuts – not ideal for my peanut allergy!

Strangely my personal favourites, the fish & chips, mushroom rarebit and open salmon sandwich, I didn’t manage to get any photos of. I assume I scoffed them so quickly I forgot to photograph them first. Rubbish blogger and I’ll definitely never make a food critic!

The menu has a decent range of dishes, including some fun children’s options such as locomotive-shaped pasta. There are breakfast, all day and sharing sections of the menu, all of which I felt were reasonably priced given it’s in Central London. Even the bottles of wine were around the £15 which seemed pretty fair.

We both really enjoyed Canteen and would happily return with Joshua. It’s a fun space right in the heart of London that is a bit more special than your average cafe bar. It’s bright and modern, but still manages to retain a cosy and historic vibe.

Of course, it’s an ideal place to go after a trip to the London Transport Museum itself, but it’s also somewhere that would be very suitable for a drink and a bite to eat after work or before heading off out to see a show. It’s open 930am to 730pm Wednesday to Saturday, closing an hour earlier the rest of the week, so if you’re in the area and have even a passing interest in London Transport it’s well worth a visit.