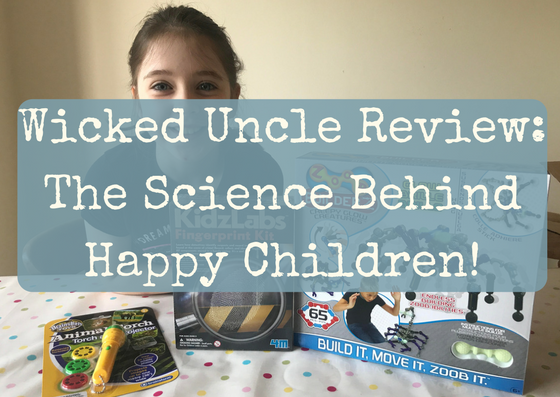 I was very excited when I was given the the opportunity to write a review for Wicked uncle, for two reasons.

Firstly, it was the end of the Easter holidays; two weeks of trying my hardest to entertain three chocolate-filled children and I was out of ideas, patience, money and wine.

Secondly, I am the owner of a science mad almost nine-year-old girl who quite frankly is deserving of a little treat… A bloody medal actually. She lives with two toddlers who constantly touch her stuff, nothing is hers and hers alone, she tries to hide things but they can sniff out a new toy like wild pigs hunting truffles. And yet, she never moans, and so I was excited to give her the chance to have this little bit of something just for her.

The Wicked Uncle Website is good and very user friendly. To be honest I have bugger all attention span, especially when trying to pick science toys so I told Her Ladyship the sort of thing we were shopping for and handed her the iPad all I had to do was step in for the payment bit. 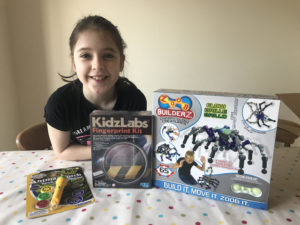 And with the last few quid shot for an animal torch and projector for the small ones to play with, she’s a good spud.

I like that there is the option of gift wrapping and a card! Everywhere should do this. I am the shit Aunty who lives 600 miles away and always sends the boring and predictable card and voucher combo (if I remember and am not skint); this is a much cooler way to send gifts.

She had been looking forward to it from the moment we ordered it, so I was pleased the standard delivery option didn’t take longer than three days as I was about to slam my face into the toaster if I had to answer the question “when will my building things be here?” one more time. 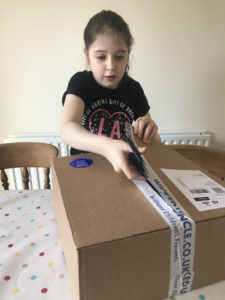 We opened the Zoob thing first.

There was loads of it! I was actually really impressed for the price.

She got stuck straight in. At first I wasn’t allowed to touch, talk or interact at any point because “mum, no offence but you don’t understand this stuff so could you please just make me a drink”. 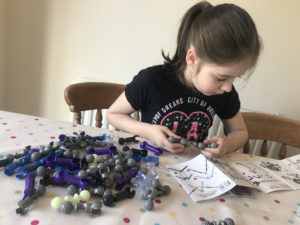 As well as the all the bits, the  pack had instructions on how to build 9 different “creepy creatures”

She had a whack at the scorpion but it all turned to shit. I was hauled back and couldn’t get it either so she decided to just freehand it and sat at the table for well over half hour happily making different animals and structures of her own design and telling me what they all did. I was riveted*

Once she’d run out of ideas we had another go at following the instructions. This time we went for the spider, it looked easier. We had loads of fun chatting and building together and the end product was the bollocks! Even a totally sober me was impressed. 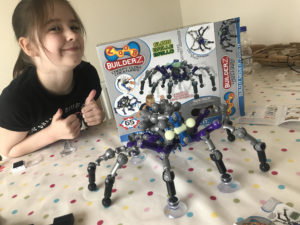 Turns out this kit was a very good choice indeed, and they have different sets in the Builderz range to suits all interests. She’s already asked for the others for her birthday next month, that’s a win because I had bugger all clue what to get her.

It’s was time to move on to the fingerprint kit. 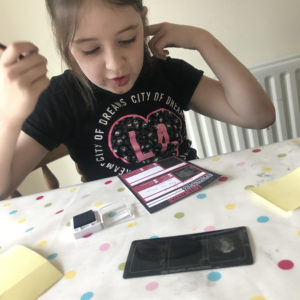 Molly would have continued with the Zoob Builderz for a good while but once I’d mastered the spider I was done. Remember, short attention span.

I was slightly less excited about this activity. It looked fairly complicated and I just had a feeling it was going to be “parental input” heavy. However, before we’d even finished getting it out the box I had to go and deal with a rather horrendous poonami situation. The baby’s, not mine.

By the time I got back she’d figured it all out and was already taking her first finger print and filling in her very own “criminal record”! Everyone in the house had to have their print taken and it was all rather comical. Apart from the fact that we all now have dark grey finger tips, this too was a very successful choice. 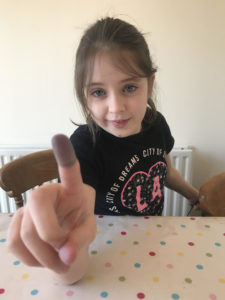 The small ones played with the projection torch almost the entire time.

I handed it to the middle child when we opened the box and they set themselves up in the downstairs loo (no window, good and dark) and proceeded to scream at the different animals with delight. I did have to change the little projection discs when they got bored as that was a bit fiddly but that was it. They loved it. 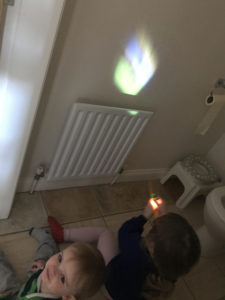 The torch itself was a bit flimsy but the idea is fantastic. It’s the three-year-old’s new favourite toy and she’s managed to burn the retinas out of the eyes of every single visitor we’ve had since she got it by way of shining her great new toy in their face the second they step over the threshold.

Our first Wicked Uncle experience has been a huge win!

No one cried, there was no shouting or tantrums from any of us and apart for the massively unpleasant shit I had to deal with (not Wicked Uncle’s fault) we all had a thoroughly pleasant afternoon.

I will definitely be using them for now on, not only for my relatives but also for my own kids.

The age and interest filter is genius. I am so crap at thinking up gifts so it’s perfect for me and from the small selection of toys we got to try the products seem good quality and fairly priced.

Thanks Wicked Uncle for helping me claw back some mum points I lost when she caught me eating one of her Easter eggs.

Kirsty received the toys for free for the purposes of this review. If you want to read more from Kirsty, and you should, you can read her brilliant post about being a mum of three here.

One thought on “Wicked Uncle Review: The Science Behind Happy Children!”