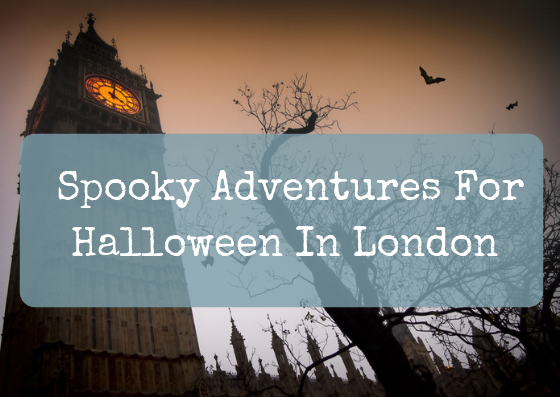 It’s almost that time of year again for ghosts and ghouls to make an appearance on your doorstep. However should you wish to escape the trick and treat merchants this year why not try some of these ghostly adventures that are on offer in London this Halloween.

Jack the Ripper Tour
If you want to soak up a bit of London’s dark past then you might as well go for London‘s Mr bad guy, Jack the Ripper. Guided tours exploring the world of England’s most notorious serial killer have been going since 1888. This is a brilliant way for you to, not only play Sherlock Holmes in the world’s ‘greatest unsolved murder mystery’, but you get to soak up the back streets and architecture of Victorian London whilst learning all about life in Whitechapel in the 19th century.

Jack the Ripper stalked the streets of Whitechapel in the autumn of 1888 and was responsible for at least five murders. The name caught the public imagination and created the biggest police manhunt in British history at that time. Yet despite hundreds of theories and armchair detectives, the killer has remained as elusive as ever. 130 years later and the Jack the Ripper tour retraces the original police manhunt and points out all the places of interest which featured in the story.

At the end of each tour you will be invited to decide for yourself who the elusive Ripper could have been. A Royal Prince? An insane Doctor? A mad butcher? All have taken their turn in the dock. Perhaps you might crack the case on a tour this Halloween, who knows? We recommend the new Ripper Vision tour which uses handheld projectors to shine the original images onto the walls and streets, bringing the Jack the Ripper story back into the 21st century.

The London Dungeons
At Halloween time we all love to hear those ghastly tales of murder, torture and other foul deeds. So you really won’t be disappointed with a visit to the famous London Dungeons. Its suitable for all the family which makes it a nice treat for your little boys and ghouls.

The Dungeons has been entertaining visitors for over 40 years with its live actors and funny but ghastly stories dragged and dredged from London’s past. The actors make this attraction what it is and their funny way of delivering the stories will be memorable to say the least.

The high jinks all take place in excellent movie style sets that mix in scenery, smells, theme park style rides and an atmospheric experience to make you truly believe you have left the 21st century behind. Whether you want to step into the shoes of a traitor in the days of Henry VIII or join Guy Fawkes in the infamous Gunpowder plot, there is something for everyone. But beware there are jumps along the way, so those of you in a squeamish manner or pregnant might not find this attraction suitable.

London Ghost Walks
As haunted cities go, London must rank in the top three of the worlds most haunted. Centuries of ancient history lies all around you and perhaps an entire legion of London’s former residents are just dying to meet you on one of the many famous London ghost walks. Ask anyone what incorporates a great ghost walk and they will say, churchyards, graveyards and spooky alleyways. Well London has all that and more.

Halloween sees many tours out and about with some great theatrical guides providing a terrific experience. The kids will love the ghostly tales and you will not only be entertained but also educated on some of the city’s more quirky and hidden areas.