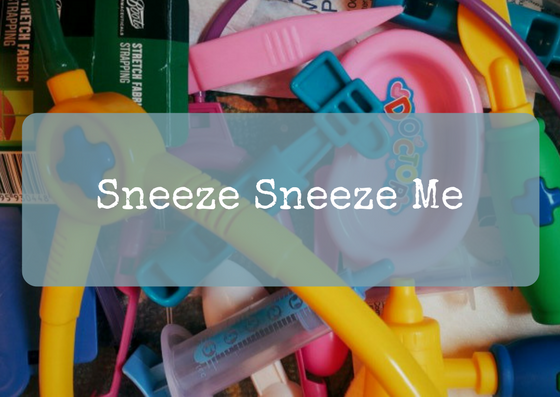 Season 2, Episode 24. In which our reluctant hero is feeling a little bit under the weather*

This week, I have mostly been sitting on trains. Or should that be sitting “in” trains? No matter.

Although somewhat of a pain, this is not always the hardship that it may seem. If nothing else, it gives me a chance to catch up with a bit of telly. On a good week, it also helps me finish my weekly blog post before Friday’s half five klaxon. Sadly, not this week though. I have had a bit of a cold.

To add some context, it’s just a head cold. The sort that makes you feel vacant and tired, like someone scraped your insides out and replaced them with porridge. Not even proper porridge either, but that yacky just add water stuff that some genius thought of popping in small packets to increase Quaker Oats’ profit margin by a gazillion percent.

Granted, this particular strain of cold would probably kill the average human and/or medium sized elephant if they came too close. My immune system is usually pretty solid though, so you’re not going to hear me banging on about it. Much.

Like many other things that I enjoy doing, like writing and photography, having a cold is an experience best enjoyed on your own. Plod through work, spend a few evenings with feet up on the sofa, watch some French New Wave cinema, snack on junk while sipping hot toddies, and all will be fine by the weekend.

Being a dad, there’s clearly no chance of that happening so I (wisely) chose to tackle the worst of it sitting through a pile of management meetings during three days away. Meetings. So long as you remain conscious enough to nod your head and occasionally grunt in agreement then everything is fine. It always is.

Occasionally, however, you don’t get that luxury. You have to be ill at home… *shudders*

This is never easy, even for the most battle hardened dads, so I’ve cobbled together some quick tips on how to survive it. You’re welcome.

A) Those times where you’ve barely the strength to press “start” on the microwave mid-cold.
B) Basic survival in 2017, what with the bonkers shenanigans going on over the pond.

Failing that, don’t try to be Superman. Or Superwoman. None of you are going to come to much harm with a bottle, or boiled eggs and soldiers for a few days. Depending what’s in the bottle, and for whom, obviously.

Part one – Birth to toddler
It’ll all be fine. Trust me. Assuming that the little person is being breastfed, it’s immune system should only be penetrable by kryptonite. Make sure it’s topped up with fuel, pop on a play mat on the floor, reach for the remote and pop “Homes Under the Hammer” on series link. A doddle. If formula fed, buy shares in Calpol and some earplugs too.

Part two – Toddler to two
The key here is not letting on quite how ill that you are, then ring for help. By the time International Rescue arrives (or more likely Elf Rescue these days, yes?) it will be too late for the rescuers to turn back. It’s a dead cert that they are going to get ill too, so the least that they can do is let you get your head down for a couple of hours. The alternative isn’t worth contemplating.

Part three – Two plus
You may be at the stage of making use of a couple of hours at nursery or playschool per day which will help no end. Get some kip if you can. If you happen to be home alone it gets a whole lot more difficult. Hope is not lost though as there’s a few options that you can consider.

i – Try to play with them
Sounds fine, but it’s unlikely to work as you’ll be tired, grumpy and fed up with the mess within seconds. If you insist on this course of action, then playing the patient in a game of “doctors and nurses” may buy you a sneaky forty winks.

ii – Leave them to it upstairs
Have you seen that David Attenborough programme about the wildebeest migration across the Serengeti? The sheer pace and power needed to move so many animals across such distances so quickly is mind blowing. Impressive as this is, two kids left alone upstairs can displace the entire contents of a couple of rooms elsewhere (other rooms, downstairs, in the garden, down the shed, etc.) a whole lot faster.

Work out the balance. Two hours peace followed by an hour of tidying has got to be preferable to three hours fighting a slow, crushing, yet inevitably losing battle, right? Deal with the aftermath later.

iii – Leave the house.
This is never a sensible plan in my experience. No good ever comes of it, especially with kids in tow.

Soft play, playgroup or similar may seem like a good idea, but someone is bound to want to talk to you, and do you really fancy climbing through four cubic metres of coloured balls to retrieve that missing sock? Thought not. On a positive, the presence of a sensory room may buy you a sneaky forty winks.

So, there you go. A few options to mull over. All doomed to failure. Go to work every time is my recommended action. It’s the only way to guarantee a rest.

*PS: There’s a shiny chocolate coin from our pirate’s treasure box for the first reader to work out the opening reference. Bet you can’t.

Well that was fun wasn’t it, Duggie?! This post was originally published here. If you liked it there’s plenty more where that came from. Just click on the image or recent posts below. It’s literally that easy…