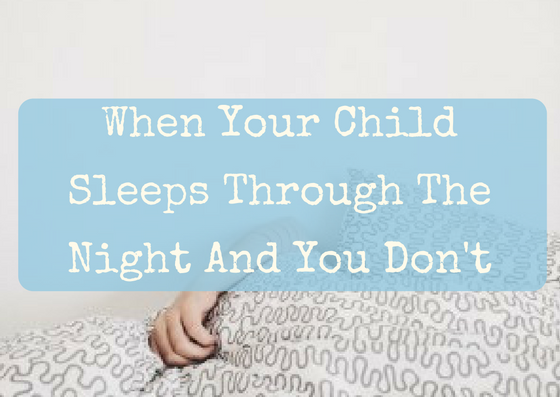 I know what you’re thinking.

You, the parent of a baby who has not yet mastered this whole sleeping thing. The parent who got woken up by cries every few hours last night. The parent who walked back and forth in a dark room at 4am singing lullabies to an infant who could not have given less of a f**k.

You’re thinking that my problem is a pretty nice one to have – and you’re right. It’s kind of like complaining about how you lost too much baby weight and now you can’t fit into any of your pre-pregnancy jeans. It’s not a REAL problem.

And I get where you’re coming from. I’ve been where you are. The Popple didn’t sleep through the night for a full year. Not only that, but she spent the majority of that year waking up every 1-3 hours, and she only wanted me. Most specifically, my boobs. And later, once she was boobing less, my hair. I lay on a bed that was pressed up next to her cot and pushed my hair through the slats so she could hold onto it while she slept.

It was a long year.

At some point during that year, I gave up hope of every sleeping properly again. Napping in spurts of up to three hours, broken by crying and boobing and hair and checking Facebook on my phone, became my new normal. It was s**t, but I accepted it.

And then it happened. The Popple learned how to sleep. She sleeps like a freaking champion now. But here’s the problem:

I was never that great at sleeping. I’ve always envied people who conk out once their head hits the pillow and wake up eight hours later, refreshed and ready for the day. My nights have always looked more like this:

Amazingly, my sleeping seems to have gotten even worse post-baby. This may partially be due to the fact that my body got used to waking up every few hours during that first year, but I also think it’s because ALL THE THINGS now includes a child. The Popple has added a whole other level of anxiety to all the stuff swirling around in my brain.

I’ve tried mindfulness. Mediation. White noise apps. My brain shouts over all of them.

Brain: Do you think you should have let the Popple watch the Single Ladies video today?

Me: What’s wrong with Beyoncé?

Brain: I’m not sure she’s a great role model.

Me: Beyoncé is a successful business woman and mother. Plus that song is really catchy. The Popple loves it.

Brain: You know what they say about screen time for children under two…

Me: Yes, of course I know. Everyone bloody knows. But she was screaming and Beyoncé made her stop.

Brain: Beyoncé is pretty scantily clad in that video. Plus she’s wearing that weird glove thing. What’s that about?

Brain: Up in the club, we just broke up, I’m doing my own little thing…

Meanwhile, all is quiet in the room next door where the Popple is sleeping like…well, a baby.

*Obviously I’m not a separate entity from my brain. The ‘me’ in this instance is my rational self, while my brain is the loud, anxiety-ridden bastard who won’t let me sleep.

This post was originally published on The Squirmy Popple. For more squirmyness, pop(ple) along to the blog, or click on one of the recent posts below. You know you want to…