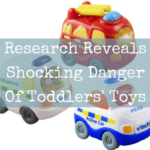 An extensive and comprehensive study has definitively shown that toddlers’ toys such as those produced by V-Tech can have lasting and serious health consequences for unsuspecting parents. The condition, known as V-Mania, manifests itself in parents subjected to the constant jibberish emitted from the wide range of the popular children’s toys. And research conducted in Reading has shown that exposure to such toys for more than 2 hours in a single day can have shocking impacts on the human brain.

Two parents, based in the popular and unassuming residential suburb of Tilehurst, were studied over a period of 3 weeks, starting from Christmas Eve. Researchers took initial baseline readings from both parents across a range of areas such as cognitive function, verbal reasoning, heart rate and ability to communicate. On Christmas Day, 9 V-Tech items were introduced into the property and researchers studied the subjects via a network of probes and hidden cameras to see what impact the seemingly harmless toys would have.

Over the course of the first two days, researchers found that the toddlers’ toys actually appeared to increase overall happiness within the house. The subjects exhibited increased levels of serotonin as their child played with each toy in turn and a series of cheerful, uplifting phrases were emitted from the various V-Tech vehicles, including a zebra, lion, elephant and a collection of emergency vehicles. Although the researchers had suspicions that some of the lightened mood was associated with excessive alcohol and chocolate intake, it was clear that the new toys had no negative health implications at that stage.

However, from the third day of the study, some fascinating scientific revelations began to manifest themselves in the subjects’ behaviour. As lead researcher, and head of the Pointless Scientific Institute, Faye Li-Ur, revealed: ‘Day 3 threw up some potentially groundbreaking discoveries in our subjects, as we witnessed both partners staring at the toddlers’ toys for minutes on end, seemingly in some kind of transcendental state. This became particularly evident when 3 or more of the toys were making noises at the same time.’

Aside from this worrying development, researchers also noted that the father would recite phrases from the toddlers’ toys at random intervals during the day, such as:

‘Call 999 and I will catch the burglar’ and ‘My ears are large and my trunk is long’.

Symptoms worsened during the course of the next few days and researchers witnessed a mixture of emotions within the house, including anger, confusion, despair and bewilderment.

The final week of the study produced the most shocking evidence of the potential effects of V-Mania. As assistant researcher, Ivor Shitjob, told us: ‘With the subjects having been in close contact with the toys for 14 straight days, we observed signs that the toys were exerting some form of mind control. The parents, despite clearly despising the toys, appeared helpless to resist them, routinely turning them all on at 7am and listening to their inane ramblings until 7pm. Often all 9 were operating simultaneously and creating the kind of aural misery and distress normally only encountered during the torture of war criminals and terrorists.

By day 18 it had become painful to watch as the parents had clearly lost the will to live and seemed powerless to influence their own fate’.

Such was the concern of the researchers that on day 19 the study was abandoned and a team of therapists were brought in to stage an intervention. Attempts were made to neutralise the 9 toys using a heavy-duty hammer, a flame thrower and an industrial crusher, but to no avail. The house has now been abandoned and the family rehomed.

We spoke to the family after 4 weeks in a secure mental institution to find out what they remembered of their ordeal. ‘I’m a powerful dumper truck, I rumble down the road, moving my load from here to there’ revealed the 31 year-old mother of one. In a momentary spell of lucidity, the father explained that he just wanted to be reunited with the V-Tech zebra, as he found its desire for adventure inspirational. The subjects’ 19 month-old son, added : ‘Tum tum’, ‘bum bum’, ‘daddy, mummy’ and something that sounded like ‘biscuit’, before saying ‘done’ and laying on the floor screaming for no apparent reason.

Head of Plastic Studies at the University of Slough, Megan Obend, said that she wasn’t surprised by the findings. ‘The human brain simply cannot process the fact that these colourful plastic, noisy, misery-making toddlers’ toys repeatedly say things that do not rhyme. People are accustomed to things that rhyme, but these things, these abominations, don’t even attempt to rhyme – they just repeatedly say stupid things.’ The Daily Mail conducted a poll to gather reader feedback. They found that everyone was very angry about absolutely everything for no apparent reason and most blamed the UK’s policy on immigration. V-Tech made no comment, but to be fair we didn’t actually ask them for one.

Experts warn that toddlers’ toys should only be used in short bursts and, even then, only if the parent has ready access to alcohol and chocolate. The family have a long road to recovery ahead of them. Even if the intensive combination of therapy and medication is successful, they are still likely to hold the long-term belief that animals can talk and that the Police actually catch burglars.