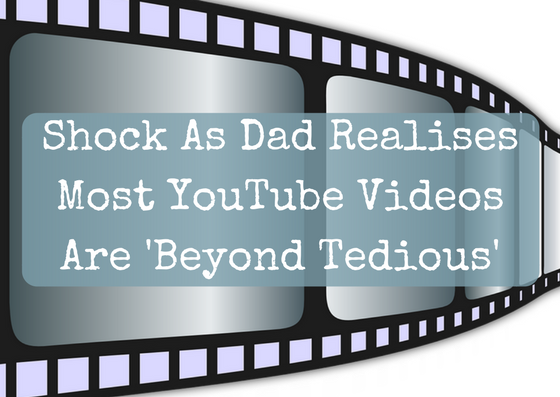 A dad has spoken out after his shock realisation that the vast majority of YouTube videos are actually just people doing really dull things that he personally also does on a daily basis.

Des Pratt, 34, from leafy Worthing, made the groundbreaking discovery whilst on his 5th hour of watching videos of people doing unique and fascinating things, such as walking to the shops, cooking dinner and watching paint dry.

‘Initially I was fascinated to watch people going about their lives and sharing it with the world. I would almost wish that I could be them, with their glamorous and fulfilling lives,’ Des revealed as part of our exclusive interview with the stay-at-home father of two.

‘However, after a few hours of watching YouTube videos it dawned on me that instead of watching a stranger walking round Asda I could actually just go out and walk around Asda myself. Obviously if they were walking around Waitrose or somewhere like that it would be worth watching as it’s not something I’ll probably ever get to do in my life. But Asda isn’t exactly aspirational…’

But Des confessed that the real game changer was when he realised that instead of watching someone else’s child slowly take a new toy out of a box he could just watch his own son take a toy out of a box instead.

‘Admittedly I’d be left with a box to throw away but my son would also be left with a toy to play with, so it’s swings and roundabouts really’ he said.

Des said that he will still continue to watch YouTube videos but will limit his searches to ‘nip slips’, ‘cat videos’, donkeys in cardigans’ and ‘cute and funny moments with Kristen Stewart’ in future.