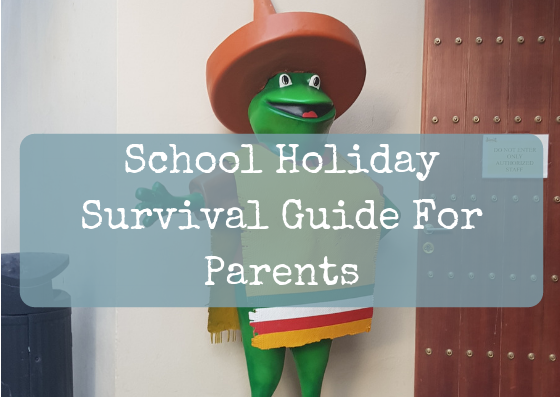 School holidays are a load of fun, aren’t they? You’ve just about got in the swing of the school routine, planning drop offs and pick ups and lunches and the never-ending laundering of uniform when suddenly it all stops.

Depending on the time of year, this could be for anywhere between a week to 7 weeks. SEVEN WEEKS when your routine goes out of the window and you return to being solely responsible for your little ones. SEVEN WEEKS of needing to physically be there at home doing things with them. SEVEN WEEKS of being accompanied to the shops, or the cafe, or the doctors or whatever else you might have had in mind! And, most importantly, SEVEN WEEKS of keeping your offspring entertained every minute of every day.

It’s quite a big change, as we have recently discovered. Here’s how we have coped so far. And when I say coped I mean survived.

10 Tips For Surviving The School Holidays

Ensure there are enough snacks in the house to feed an army.

Of elephants. I don’t know how often they feed children during the school day but I’ve a funny feeling it’s not 27 times. And yet in the holidays, the majority of words uttered will be along the lines of:

‘can I have something to eat’, followed by ‘no’ until eventually:

‘fiiiiiiiine just get something and stop asking!’

Assume the majority of the plans you make will go down like a shit sandwich.

Don’t build your hopes up that spending £100 on an awesome day out somewhere exotic will satisfy your child’s need to be entertained.

‘Not really as there was only one fun thing to do there and I was expecting there to be 10 fun things to do there’. Great.

Make sure you share the responsibility with your partner / any other consenting adult. If you don’t you will go batshit crazy pretty quickly. If they don’t feel the urge to take some time of work during the holidays ring up their work and take the time off for them. Or fake a resignation letter. If you attempt to solo parent for 7 straight weeks you may end up in a straight jacket and that’s no good for anyone.

It doesn’t have to be expensive (joking, you could choose to stay in a piss-stained 1980s caravan in Cleethorpes and it would still cost you a kidney) but make sure you go somewhere. Yes, admittedly going on holiday with a child can be, ahem, taxing, but at least it’s a change of scenery. Different snacks. Different beds to get woken up at 6am from. Different people to judge you for your child’s behaviour.

Arrange some ‘me time’

Unless you really fancy losing your mind progressively over a 7 week period you should plan a bit of time to yourself. Meet up with a friend and get so drunk you almost forget you have kids for a few hours. Accost a stranger in the street and make them talk to you about something. Climb a large hill and sit there weeping uncontrollably for a few hours. You’ll feel much more able to cope after that.

Get out in the garden

Or the local park. Anywhere where your feral kids can run off some energy in a relatively safe space without trashing too much. Admittedly an overtired child tends to become a whining, tantrumming shitshow but at least they’ve got some air in their lungs, the noise of their incessant screaming is dissipated into the sky and they might get an early night. And by early night I mean pre-10pm.

This should keep them entertained for around the hour mark before it all goes South again.

Be flexible with screen time

It depends on what you normally allow, but as a rule of thumb if you take your normal screen allowance, multiply it by 4 and add 10 hours then that seems to be a fair compromise during the holidays.

Try to enjoy it 🤷‍♂️

If all else fails, you could just try to go with the flow and actually enjoy your kids being home. Yes, they can be little shitbags at times, but soon they’ll be out doing drugs and shagging around and really giving you stuff to worry about, so make the most of the younger years while you still can…

Just remember it’ll soon be time to invest in a new front door, ready for those new school term photos…