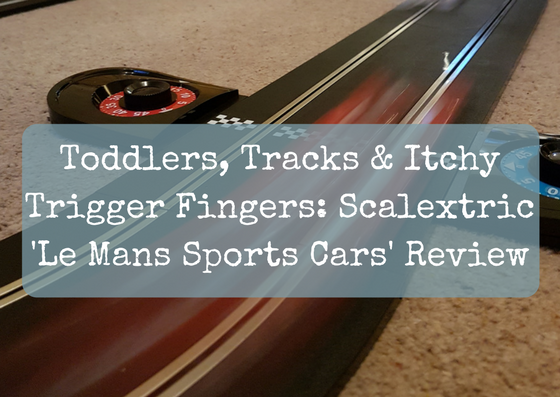 I have happy, if slightly hazy, memories of my younger years spent watching racing cars whizzing around my Scalextric track, controller in hand and an intent on winning that I’ve rarely recaptured in my adult years! Back then the cars seemed to be hell bent on flying spectacularly off the corners of the track at every possible opportunity. There’s a small chance that it may have been due to my itchy trigger finger, but let’s not dwell on the details – it was loads of fun and I have a lot of fond memories.

Which is why I was genuinely pretty excited when I was offered the chance to have a play with one of the latest models – the Scalextric Le Mans Sports Cars set – because I wanted Joshua to have the same fond memories as I did. Not because I wanted to recreate my dim and distant youth of course. It was all about Joshua. 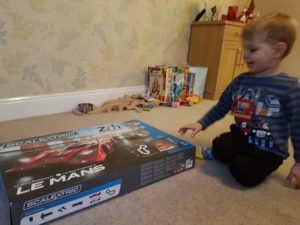 There are quite a few awesome sets available these days, but the one Joshua has been playing with for the past few days is the Scalextric Le Mans Sports Cars set, with proper full on prototype cars and a pretty big track that you can set up in four different circuit variations. When I say big, it’s pretty much 5 metres long and takes up a decent whack of the living room, so it actually looks really impressive when it’s all set up!

It’s recommended for children 5 years and up, but Joshua is only 3 and he took to it really quickly, helping to set up the track and promising not to walk on it. 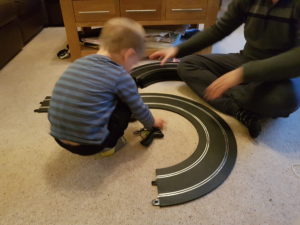 He also promised not to sit on it and not to use his Paw Patrol vehicles on it, but, you know, that’s kinda what you end up doing when you’re 3 it would seem!

The really, really useful feature when you have a young one playing with the set is the ability to limit the speed by turning a dial on the controller with a screwdriver. So I set it to the slowest possible setting and it meant that even with the trigger pressed all the way in the car literally could not go fast enough to fly from the track! It’s a massive bonus to not have to spend your entire time retrieving a crashed car from the carpet!

However, even on the slowest setting the cars still really rocket around the track. It’s definitely not like a pensioner driving a Punto down a country lane like you might expect from the slowest speed setting – it’s still properly fast and Joshua was mesmorised watching it whizz around the track! 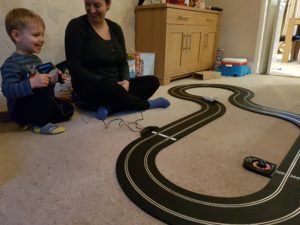 Along with the speed limiter the other really useful feature is that each car has a magnet in its rear end which really helps it to grip to the track – so even when you crank up the speed it still stays surprisingly well connected. You really would have to set the speed pretty high to achieve the dramatic barrel rolls that I remember from the Scalextric of my youth!

I didn’t do that of course, as that would be very immature.

The Scalextric track slots together really easily and there are built in clips that keep it together, which you probably won’t even notice until you try to pull it apart again. That’s why reading the instructions is so important so you don’t stare at it in confusion wondering why it won’t come apart after 5 minutes of trying! 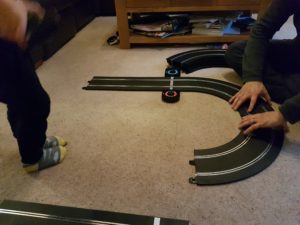 Other cool features are the lap counter which clicks round every time your car passes the finish line so you can set a 50 lap challenge or something similar.

The ability to create four different track designs is also really useful to help keep things interesting, and one of them even includes a raised section which is a nice touch. The controllers and power supply also plug in really easily, so it’s pretty much idiot proof. As demonstrated by this idiot playing with his son! 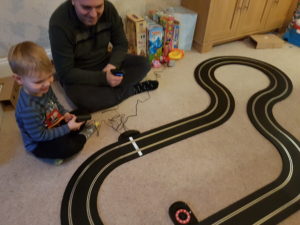 The only minor downsides of the Scalextric Le Mans Sports Cars set I could think of (if I really had to) would be that the rear fin of each car is a little flimsy so if they take a bit of a knock they can fall off. They’re easy to clip back on again, but they’re not quite as sturdy as the rest of the set is.

If you start them literally anywhere else on the track you’re golden but as Joshua desperately wanted to repeatedly put them on the checkered line it did create a little frustration! 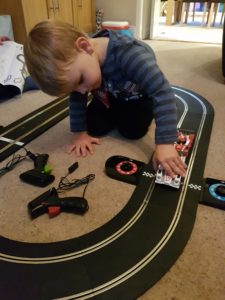 All in all we all loved the Scalextric Le Mans Sports Cars set. I asked Joshua what he liked about it and he said:

I asked him what his favourite part of the Scalextric Le Mans Sports Cars set was and he said:

Hopefully you found that feedback as useful as I did!

For me, the fact that the cars go bloody fast but still manage to generally stay on the track is awesome, as is the fact that you can adjust the speed on the controller to help younger players. 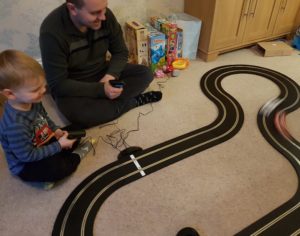 It really does have all the bits I loved about Scalextric in the 80s but just a load easier to use. The end result being that much more time is spent with the car actually on the track! 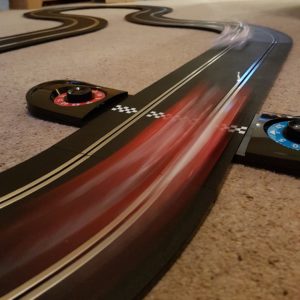 For more reviews check out our Reviews page.