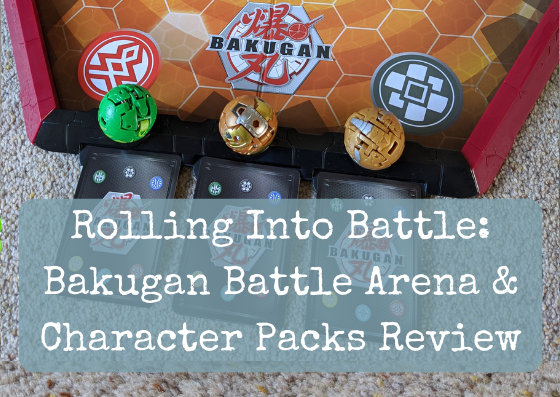 In case you have been lurking suspiciously behind a rock for the past year or so, Bakugan is a a hit kids’ TV show that has recently transformed itself into a hit kids’ battle game.

All you need are some BakuBalls and a surface to roll them on and you can compete against your friends for Bakugan brawling supremacy.

First up is the Bakugan Arena itself. Strictly speaking you can play Bakugan on any flat surface, but the specially-designed arena makes it a lot easier and a lot more fun!

The arena folds out easily, so can be packed away quickly if needed, and the plastic bumpers around the outside are also nice and easy to clip together. The bumpers help prevent your BakuBall from rolling out of the arena, and the rest of the arena offers places to put the Bakucores and your BakuBalls, but we’ll come on to them in a bit.

Very simply put, each player pops their balls onto the arena wall, chooses one to toss and rolls it into the arena. Ideally your BakuBall will transform into a glorious Bakugan and magnetically pick up a BakuCore as it rolls into the arena.

There is a more complicated version, but the one I played with Joshua is pretty easy to pick up, roughly as follows…

If one player’s Bakuball opens up into a Bakugan and the other player’s remains concealed the transformed Bakugan wins that round.

If both BakuBalls remain untransformed, neither player wins, and the battle in redone.

But if both BakuBalls open up into their true Bakugan glory both players look at the number on the BakuCore their Bakugan picked up and combine it with the number on the corresponding Bakugan character card. Whoever has the highest total wins that round.

The winner of each round keeps their Bakugan proudly displayed, whilst the loser must convert theirs back into a ball. The player who successfully displays all three of their transformed Bakugans first wins. Easy.

The Bakugan Battle Arena is a great focal point for the game and retails around the £25 mark. It also comes with one Bakugan, and associated character card and two BakuCores. It’s available at all good retailers including through the affiliate Amazon link below.

Although the Bakugan Battle Arena comes with one Bakugan to get you started, there are an impressive 100 to collect. You can build your collection in a variety of ways, including the Bakugan Core pack retailing at £6.99.

We received four of these packs, with each containing one Bakugan, character card and two BakuCores. We already had one Bakugan from a few months ago, so here are the six in all their glory, including the one that came with the arena. The core characters come in at 2 inches when transformed.

Each character is based on the TV series, are very distinctive, and come in a variety of colours and designs so are great to collect.

The next step up from the Core Pack is the Ultra Pack. The format is the same but these characters come with a unique ability card, are 3 inches tall and also LEAP into action rather than POP into action! They come in at £9.99.

You can also get a Bakugan Starter Pack for £19.99 which includes 3 Bakugan (one of which is an Ultra) and associated character cards and BakuCores. A pretty good way to start off your collection!

Even when not brawling with his Bakugan, Joshua has enjoyed rolling them around the house and garden and has been having a great time with them.

Overall, with Bakugan making a recent resurgence, the fact there are 100 awesome characters to collect and the fact that you can battle based on age and ability levels it’s a good time to get involved!