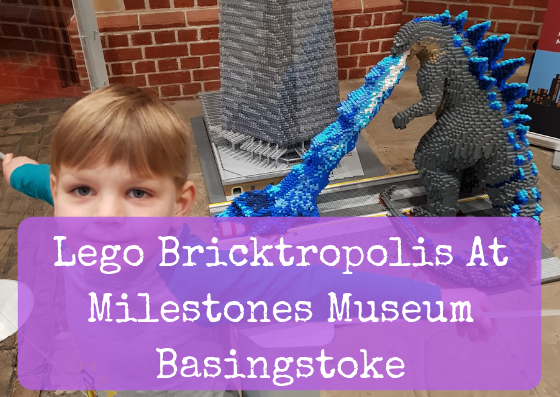 Easter holidays are in full swing and we’ve been trying to come up with new and interesting days out to entertain the little one.

Today we hit the heady heights of Basingstoke – but went back in time 80 years in the process!

Milestones Museum might sound a bit stuffy, but it’s actually a pretty interesting place, with a whole little indoor arena set up to resemble a 1930s / 40s village. There’s a whole array of mocked-up shops, displays of genuinely interesting products from over the past 100 years and a load of machines and vehicles from a bygone age.

Joshua would definitely have enjoyed the museum on its own merits as he loves machines and displays of interesting things. But, this was no ordinary trip to Milestones Museum, as it currently has Lego Bricktropolis & The Attack Of The Mighty Monsters.

Now, Joshua may love machines but he loves Lego a lot more, and this was the main reason we chose to go along. There are 26 world famous buildings all made from Lego on display throughout the museum and they are pretty cool, to be fair. The story is that they are under attack from monsters and your job is to save them by collecting the various codes. Or you can play as the monsters and collect different codes. Or you can be a double agent and collect both sets of codes. It’s pretty easy and low key and you get some stickers at the end to show you’ve completed it, which Joshua enjoyed.

There’s also a Lego building area where you are given a grid block to complete in the correct colours which you then put in the correct place in order to make one giant Lego picture. That bit took a little while but we really enjoyed that part too.

There was also an area where you could build a viaduct out of various foam blocks – a bit tricky but a good family effort resulted in success, as you can see below!

My favourite part wasn’t the Lego, or the machines, shops or vehicles though, but the area where they have a load of vintage arcade machines. Some of these were EPIC! Very basic, of course, but still epic – and all at a cost of just one old penny to play. Here are a few of my favourites:

There’s a cafe there which sells massive jacket potatoes, a shop that sells old sweets (vintage rather than mouldy) and an actual pub so there’s plenty to keep you going.

It costs £15 per adult, £10 for children and is free for under-5s and the ticket gets you in for a whole year so it’s fairly good value, especially if you have a Lego-obsessed child! The Lego display is there until 28th April 2019 so well worth a look if you’ve nearly run out of ideas for the Easter holidays! Their website is: https://www.milestonesmuseum.org.uk/event/bricktropolis-and-attack-mighty-monsters