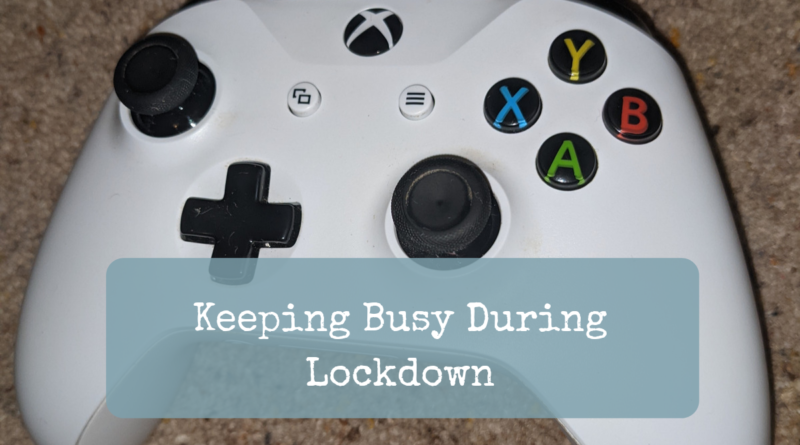 I’ve found this lockdown generally harder than the first one, or two or three or however many other lockdowns we’ve had so far. I think with the first lockdown it felt new and unusual and like we were all in it together keeping each other safe and, in all honesty, as if it was only going to last a few weeks!

But it’s been over a year now and with lockdown gradually easing again I’m not 100% sure how long it will last this time, whether Summer really will be much more normal and whether it really is all coming to a gradual end, or just another lull before another storm of misery.

Whereas during the first lockdown I felt pretty motivated to get things done, looked forward to my weekly outing to Sainsbury’s and was enjoying all of the Zoom chats and chocolate and cocktails, this time around I really couldn’t be arsed.

It was a weird kind of lockdown this time around, as I was still going to the airport twice a week for work, still going out to the shops and still seeing my mum as she was in our bubble. Joshua was Zoom schooling every day, Sarah was working from home and everything felt kind of normal, aside from the fact that we couldn’t go anywhere interesting.

I didn’t feel like I had been heroic this time around when I went to Sainsbury’s in a mask, foraging for the last pack of dried pasta and fighting off a crowd of people for the last toilet roll like it did the first time around. I didn’t feel like I had gone through a massive ordeal when I took off my mask at the end, whereas during the first lockdown it felt like I was ripping my face mask off after a gruelling 6 hours spent performing brain surgery.

It felt less isolating this time around for me due to work mainly, but instead of feeling like a new and unique experience like the first lockdown, this time it just felt like a crapper version of normal life. This time I just wanted to keep my head down until it was all back to normal. This time, although I was around a lot more people, I probably felt a bit lonelier, especially as my dad was no longer around to talk to.

However, this time around I have thrown myself into work as a way of making the days go quicker. Not actual work, as that’s always pretty much constant, with calls and emails and disasters happening daily regardless of whether I’m technically working or on a day off, but I really got into buying and selling this time around!

In the first lockdown I had started selling off my old computer games and equipment that had been hiding in my parents’ loft for 30 years. It was nice to have a bit of extra cash to put towards new windows and DIY stuff and I must admit I kind of got the eBay bug!

So I started looking for bargains on Facebook Marketplace and eBay and charity shops and doing things up to sell on again. Mainly stuff that I wanted to use, like Blu-rays, games and consoles, which I would watch / use / play for a few weeks to help relieve the boredom of lockdown and then sell on again. Or consoles that had minor faults that I could work out how to fix and then sell off again once I was bored of them.

It combined two things that I enjoy – finding a bargain and making money to make home improvements. Sometimes it was a gamble, as I’d buy something to try to fix and it ended up even more broken than when I started, but it was still fun. It felt like I was learning a new skill – something more practical than I’m used to doing.

Then it grew a bit from there. I’d spend hours researching sold item prices on eBay to see what sells well and how best to market it for the best price. I’d follow the trends to see what was increasing or decreasing in price, study listings to see the types of photos that people took and the type of descriptions that worked best. In the space of a few weeks, I knew more about video games and consoles than I ever did in my youth when I actually played them all the time!

It’s helped that Joshua has started to play on the Xbox, so I’ve been playing along with him, trying out new consoles and new games to make sure they work and just generally having fun together, keeping the bits we enjoyed for us and selling off the other bits! We’ve even been giving virtual reality a go…

I looked at my eBay sales stats this evening and in just 90 days I’ve sold over £8000 worth of items, and that’s not including the stuff I’ve sold on Facebook. I’ve always had a bit of an all-or-nothing approach to new things and I enjoy the buzz of finding a bargain and making a sale, so I’ve been enjoying it so far and it’s helped take my mind off of the world.

Obviously not all of that £8000 is profit though – if only! A decent chunk of it was spent on buying some of the items in the first place and obviously another decent chunk of it will be going to my dear friends at HMRC, but still. Over £8000 in just three months. That’s crazy, especially as I’ve only been doing it in my spare time for a bit of fun!

Currently we’re saving up for a garage conversion, so it looks like my eBay habit will have to continue for a few months longer…