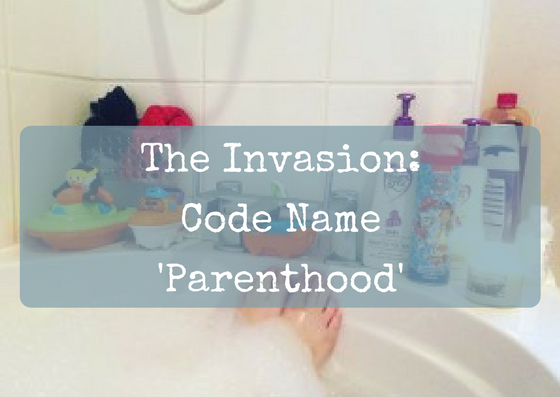 It is now 27 months since the invasion began. They started by creating some form of ‘mind fog’ and sleep deprivation system which lasted approximately a year (by this stage I had slowly built an immunity).

It started slow at first. The clear and organised kitchen sides became crowded with steriliser, formula tins, bottles and bottle washing brushes. The living room became some form of mini Mothercare with the bouncers, play mats and muslins decorating our once clean sofa.

Over the years it progressed.

The mind fog may have started to lift but was replaced with a stage called ‘crawling’. At this stage the invasion increased. The living room, once organised for comfort was covered in corner guards, furniture moved to create the illusion of space and the colourful playmats were replaced with pull toys, balls and pretty wooden toys.

Storage baskets appeared and my beautiful bookshelf of Bronte novels (and vampire books) were replaced with the  ‘That’s Not My’ collection. Somehow the invader created some form of addiction to these colourful creations within me to the point that car boots and library book sales get me genuinely excited (have you seen the price of new???)

Reader, the worst thing about this invasion is the overwhelming love. I can see my house and sanity being taken over more and more but I find myself caring so deeply for this being.

I found a way to try to rebel against the spread of the invasion. It was called ‘Gumtree’ and ‘Facebook’. I began to find others to take away some of the goods that had started to be discarded by the invader.

Soon the invader became a fully fledged toddler. With the new stage in its evolution came stair gates (I still haven’t worked out if this was to keep the being enclosed or us adults), walkers and removal of furniture to avoid the invader hurting itself and creating ear piercing sonic waves. The house was suddenly overtaken with a hypnotic device known as ‘toot toots’. The invader was prone to creating a system where every toot toot was to be activated at the same time. This was one of the worst forms of torture to date.

The kitchen cupboards became full of brightly coloured plastic dishes which quickly replaced the coordinated dinnerware that was once organised so neatly. Although we had managed a victory in something called ‘weaning’ meaning the steriliser and bottles were gone, the victory was short lived as the kitchen table was the next victim. A high chair and wipe clean matting replaced the once sophisticated dinner table decor.

The invasion spread upstairs. I had attempted to appease the being by dedicating a room to its every need and whim. However, this was not enough and the bathroom became the newest victim.

My relaxing bubble baths became an exercise in clever maneuvering. I sandwich myself between stick on bath toys (that I daren’t remove for fear of not getting them to stick on again) and surround myself with ducks, boats and the bloomin’ Toot Toots that have also spread to the bath area.

I continue to fight back and rebel. Even just the use of a scented candle and a closed bathroom door provides me a sense of control and ‘alone time’.

My advice to those who find themselves with the invader they call ‘baby’ is to just roll with it. These overlords are powerful and have an arsenal full of methods to gain your love, compassion and generally get their way. Don’t fight it, just go along for the ride. I hear rumours that during the teenage stage of evolution they become more recluse so in another 11 years I should be able to regain control of the house.

This post was first published here. For more from Mummy est.2014 click here or check out some of the recent posts below!

One thought on “The Invasion: Code Name ‘Parenthood’”