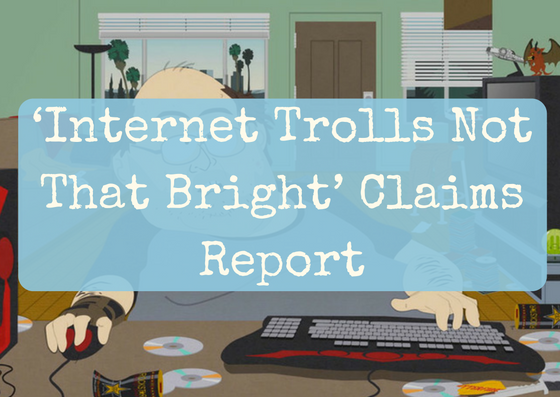 People who spend their time slagging off strangers on the internet are a little bit thick and have small penises a shocking report has claimed.

The study of 100 of the internet’s biggest losers, carried out by leading research company ‘Stating The Obvious’, also found that the ‘trolls’ had a range of other similar traits, including:

1. A minimal grasp of the English language

2. A fragrant disregard for grammar

3. A penchant for being oblivious to basic facts

5. A belief that their opinions are relevant

We spoke to one troll, known locally as ‘Sweaty, No Friends, Small Dick Tony’ who told us “I started off by shouting ‘bollocks’ at squirrels in my back garden, but after 3 years of doing this the buzz had gone so I needed to try something different.’

Tony, who is 57 and lives at home with him mum, Janice, 72, signed up for an Instagram account and his life changed. ‘Suddenly there were millions of people I could shout abuse at without the risk of someone punching me in the face’. Tony, who types with one finger and goes by the hilarious handle ‘ToneWithABone’ targets pictures of young females with comments such as ‘Nice jugs!’, ‘Sit on this’ and ‘Wanna bone?’

Strangely, despite his looks and charm, Tony is still single. ‘Considering the number of women I’ve messaged with flirty comments and pictures of my genitalia I assumed I would have been knee deep in ladies by now.’

Another troll, Colin, who targets parent bloggers, got into the lifestyle after spending 7 years writing comments on the Daily Mail website. “I hate foreigners, clever people, civil servants, disabled people, gays and people with babies, so I felt right at home in the comments section.” Using the handle ‘BrittishandProwd’ some of his most insightful comments included ‘Well if you luv foriners so much y dont u move there’ and ‘God made Adam and Eve, not Adam and Steve’.

Colin revealed that after 7 years he had almost run out of things to be angry about, so he moved on from the Daily Mail and turned his attention to parent bloggers. “Not only do they write stuff about babies they also get free stuff. I hate babies and I hate writers and I hate people getting free stuff.”

Colin, who lists his education as ‘School of Hard Knocks’ began with classic witticisms such as ‘your blog sucks’, ‘your baby looks like an alien’ and ‘your husband looks like a monkey’.

Lead researcher, Billy Bullshit, summed up his findings with the following:

‘Although most people experience jealousy, anger and loneliness, these trolls unfortunately have no friends or social skills to keep them from venting their frustrations and insecurities on strangers. They really are just lonely, uneducated twats, with sweaty hands and small genitalia.’

Our advice to readers is that if you ever receive abusive comments on your blogs, Twitter or Facebook just remember that you must be doing something right to make a lonely, sweaty, tiny-cocked wanker jealous of you!

Keep up the good work…

This post was first published on A Life Just Ordinary. For more from James go to his blog!