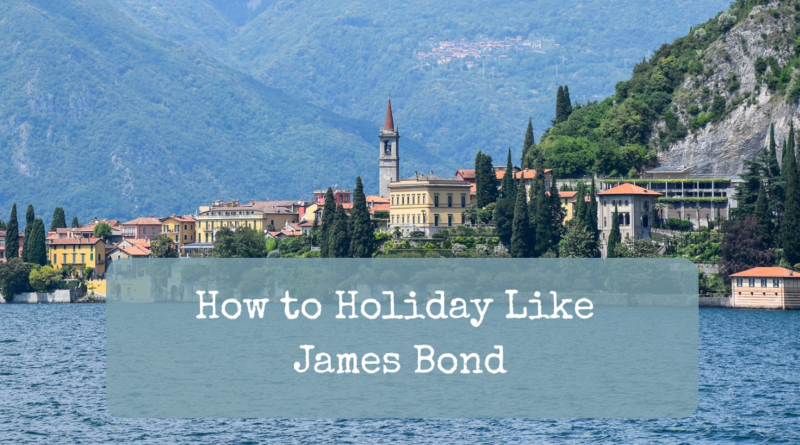 The chances are that we’ve all imagined ourselves as James Bond at some point or another. Suave, sophisticated, cool in the face of danger – Bond is an icon that transcends generations. But it’s his lifestyle that really appeals to us most; fast cars, beautiful women, and exotic locations, it’s no wonder that so many people want to be him! With that in mind, we take a look at some of the coolest places you can visit while leading the James Bond lifestyle.

Home to dramatic mountainous ranges and stunning views, Switzerland was the setting for the 1969 George Lazenby classic, On Her Majesty’s Secret Service. Taking trains, buses, and cable cars through the mountains will lead you to Schilthorn, one of the highest peaks in the Bernes Alps. Standing at 2,970m above sea level, this famous view can be spotted in several scenes in the film and is home to the famous revolving restaurant Piz Gloria, which the film production company agreed to finish in exchange for permission to shoot the movie there. In 2015 the 007 Walk of Fame was opened at the summit, a star-studded event which was attended by George Lazenby himself.

There’s no doubt that there is a lot of magic in Italy, but if you are looking for a destination with double the Bond factor, head to Lake Como which was featured in both Daniel Craig hits Quantum of Solace and Casino Royale. The stunning 12th century Villa Balbianello, which is positioned at the top of the promontory overlooking the lake, was seen in several scenes in the movies and is a beautiful place to explore or even rent rooms in for the perfect Bond vacation. The villa is surrounded by stunning parks and fountains so there is plenty to see and do when you visit.

The second most featured destination in the Bond films is the Bahamas. From Thunderball in 1965 and The Spy Who Loved Me (1977) to Never Say Never Again in 1983 and Casino Royale in 2006, these beautiful islands prove too irresistible for Bond as he returns to them time and time again. Whether you’re looking for adventure underwater with a deep-sea diving excursion or a luxuriously lazy poolside holiday with stunning views, the Bahamas has everything you could possibly want. Head to the Jaws Beach, check out the Pirates of Nassau Museum, or simply hop on a boat and relax as you take in the sights.

Known for its royalty and super glamorous inhabitants, Monaco was naturally the first choice when it came to filming the Pierce Brosnan classic, Goldeneye. From the prestigious annual Grand Prix to the glittering array of superyachts and fast cars, Monaco is one of the most stunning locations featured in any of the Bond films. The casino scenes feature one of the oldest gaming establishments in Europe: the Casino de Monte Carlo, which was the brainchild of Princess Caroline of Monaco and first opened its doors in 1856. Monaco is also home to the lavish Prince’s Palace, the Opera de Monte Carlo, and beautiful gardens, which make it an absolute must for any Bond-inspired vacation.

In one of the most popular Bond movies of all time, Daniel Craig makes an appearance in the famous Floating Dragon Casino in Macau, famous for being the “Las Vegas of China”,

Macau is as glitzy and glamorous as it looks in the movie. But it’s not just about fancy casinos and late-night parties. Macau is also home to ancient ruins and beautiful buildings that are rich with the history of Portuguese settlement. Stay in one of the many high-rise apartments and condos which all offer incredible views over the city, particularly when everything is lit up at night, before you jump on a boat and head to Hong Kong to explore another beautiful city and make the most of your vacation.

Whether you’re looking for sun, sea, and sand or a thrilling adventure at the top of the world, there are plenty of destinations that you can head to for a James Bond-inspired holiday. Just remember to pack your Bond-style gizmos and gadgets so you can get yourself out of any sticky situations!

For more holiday ideas check out our holidays and days out page!