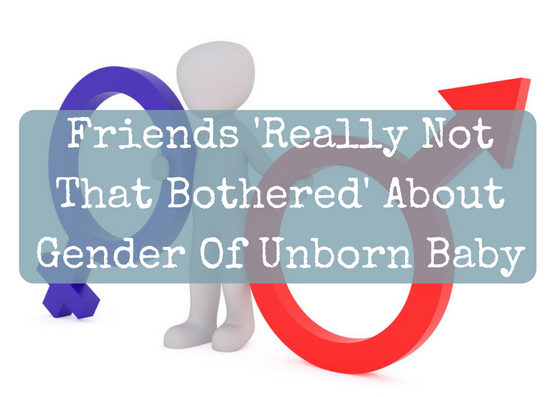 
Friends of a couple who announced the gender of their unborn child by painting an entire village pink and hosting a live 1 hour Facebook extravaganza have shockingly revealed that they ‘couldn’t really give two shits‘ about the unborn baby’s gender.

Toni and Guy, both 34, from Bucklebury in Berkshire, embarked on the dramatic and costly gender reveal amidst a recent trend for the subject on Facebook. Most parents-to-be will choose to either keep the gender a surprise by looking away at the opportune moment during the 20 week scan or will avidly keep an eye out for anything on the screen that looks like a miniature todger. However, they crucially will then either keep it to themselves or discreetly tell family and friends.

More recently though a plethora of parents-in-waiting have decided that the gender of their unborn child is such a notable event for society as a whole that they must tell the entire world in as elaborate fashion as humanly possible. And Toni and Guy jumped on that particular bandwagon with shocking results, as they doused their village and all of its buildings, parks and waterways with 457 gallons of pink paint, sprayed from a bespoke aircraft, designed specifically for the gender reveal, at a combined cost of £2,500,000.

Guy, who is a (massive) banker in the City, and Toni, a psycho (therapist) didn’t quite get the reaction they had hoped for though – whereas they expected street parties and a public holiday named in their unborn daughter’s honour, they were instead faced with furious villagers and a bill for the resulting clean up of well over £5,000,000.

We spoke to two of their friends, who wished to remain anonymous, about the stunt and the resulting fallout across leafy (apart from Slough, which is a hole) Berkshire. They revealed that they always thought the couple were ‘a bit twattish’, but didn’t think they’d go this far.

‘To be honest we couldn’t quite believe what they had done. A live video just popped up on Facebook and suddenly there was a plane, dropping pink paint out of the sky onto anything and everything below. It was like something out of a really weird horror film.

We knew they were having another child and were happy for them but, to be honest, we couldn’t really give two shits as to whether it was going to be a boy or a girl. After all, it’s not our child! Quite what the other 12 viewers on Facebook thought of it all is anyone’s guess!’

The final shock came for Toni and Guy when the baby was finally born – as it turned out to be male. However, given the lengths they went to in order to share their thrilling news they have followed through with their original plans by naming him Claire.


If you enjoy news stories like these you may feel the uncontrollable urge to visit our fake news page. Before it all becomes reality…