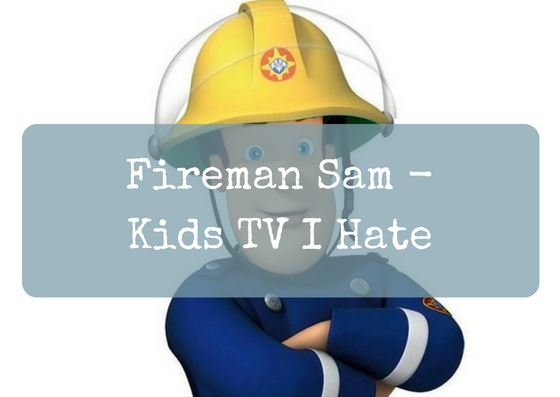 There are some subjects that almost every parenting blogger will cover; exhaustion, feeding, weaning, poo, milestones and Kids’ TV.

I’m no different. I’ve covered a couple of these and I’ll make sure I get a full house before long.

As a parent, whether we intend to or not, we get sucked into the world of Cbeebies et al.

We start our parenting journey declaring our little angel won’t watch more than one hour a TV a week.

Then it’s one hour a day.

Then it’s as long as you need to get your stuff done and have a moments peace.

Then they’re hooked, you’re buying the toys, magazines and other paraphernalia to keep them placated. It’s a cycle that pretty much all of us descend into.

Off the top of my head I struggle to think of any children’s TV that is actually bearable.

Obviously ‘Hey Duggee’ is a winner. There is no show on earth better for adult or for child. Duggee is an anomaly though.

The list of questionable kids TV is far greater.

How does Joy not lose her shit all the time? The cakes are all over the bloody floor Joy, no not “Nevermind”. If they hadn’t been pissing about they wouldn’t have knocked them over! And why are Topsy and Tim  clearly adults before they start ‘reception class’?

The trains have drivers who they rely upon to fuel them and clean them. Why don’t the drivers stop the trains going the wrong way, taking the wrong loads and generally causing mayhem?
Are the humans living in fear?
Are the trains vicious dictators?
Is it an indication of modern day slavery?

What is the point in the human site staff of Spring City?  They can’t get inside the vehicles as they are living entities, instead they are ‘piggy backed’ around.
The vehicles do all they work, the humans just tell them what to do.

Also, if Bob and his team are THAT good, why are they always available at the drop of a hat. They never have to put a job off until summer…

She is one of the most rude and insolent swines around yet no one ever calls her out on being a grade A twat.
If she were my child I’d be mortified at the way she talks to people.
She’s always belittling Daddy Pig, it’s like everyone laughing at him sometimes. “Silly Daddy”.

No! Fuck off Peppa. Daddy is bringing in 50% of the money to buy you red shoes and wellies for you to jump in muddy puddles.
Patronising little pig.

As you can see, I’ve spent a LOT of time thinking about this.
All of the aforementioned annoy me but you know which show irks me most of late?

Let’s take a good look at Fireman Sam and the rural idyll of Pontypandy.

Pontypandy appears to be a town made up of 23 humans and a dog – Radar.
16 adults and 7 children.

Four of those adults are fire officers and one is mountain rescue.
Maths is not my strong point but that means about 24% of Pontypandy are the emergency services.

Pontypandy is a lovely village of both coast and mountain, this lends itself to hosting a lot of accidents.
Except many of the emergencies aren’t accidents, many are incidents caused by Norman Price.

His inability to follow instruction, adhere to basic health and safety or just not be an idiot leads to the majority of incidents in the village.  Granted there have been a few fires caused by fresh manure and a tea towel on the hob, but they’re mostly of Norman’s doing.

Dilys needs to take a bit of responsibility for Norman, she is his mother after all.
I am not parent blaming by any stretch but if she did more than call him ‘a naughty boy’ or actually made him be held accountable for his actions, he might learn.
Where I’m from he’d have been handed an ASBO years ago! He’d have probably made the news too.

Though I am sure Pontypandy fire crew undertook and passed all exams required of them, I am still terribly concerned. They are a crew of four humans and a dog.
That very same crew is on duty all day every day.

They never get a break.

In fact, once a fire breaks out folk don’t yell “call the fire brigade” they dial 999 and ask for Fireman Sam. They know he is going to be on duty no matter what. They must be entirely overworked. They’ll be exhausted.

That can’t be safe!

Although Sam is a bit full of himself, the fire crew seems like a nice bunch. I am a little concerned about Elvis though. I appreciate that Pontypandy fire service work on an equal opportunity basis. They are all for equality, as am I.

But Elvis? He’s clearly suffered a head injury in one of their many rescues and, well, I wouldn’t be confident in him rescuing my children. I’m sure he is a super nice guy though.

Once the fire crew are dispatched to, say, a chip pan fire. They will tootle off in the fire engine. They will also scramble a quad bike and an emergency rescue helicopter.

Just in case. They are understaffed, over worked and over equipped. At the cost of approximately £1,000 for the fire engine and another £1,000 to scramble the helicopter. That’s at least £2,000 of taxpayers money to go and rectify the mistakes made, generally by Norman or someone else being, frankly, careless.

Over the years there have been around 200 incidents in Pontypandy. That’s a total of £17,391 per resident. Why doesn’t the government just close Pontypandy? Intentionally displace the residents to larger communities where they can’t cause quite as much grief.

Except Norman, they should probably send him to juvey, he’s had enough chances. He’s nothing but bother.

Sam, Penny, Elvis & Station Officer Steele could take a well earned break and the government could pop the wasted money into that deficit we’re always being told about.

Or not as the case may be!

This post was first published here. For more from the YHTL Comedy Awards 2017 nominated Me, Annie Bee click here or on any of the images below!