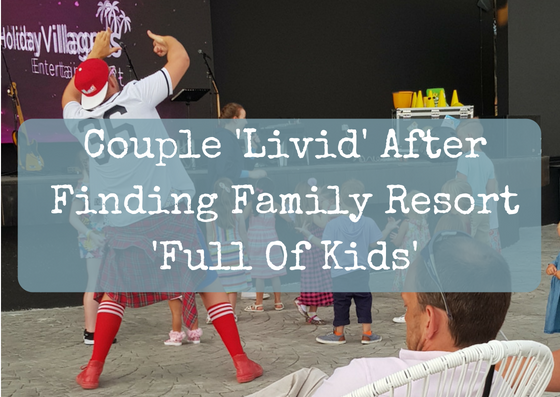 A couple have launched a furious tirade on social media after their dream holiday to the Family Fun Time Resort in Montenegro turned to misery when they discovered the place was ‘jam packed full of kids’.

‘When we booked we had no idea at all that the resort was aimed at children’, explained Robin, 32, from Blackpool.

‘We had spent a lot of time researching possible resorts to stay at in and around the former Yugoslavia and decided upon Family Fun Time Resort as it seemed to perfectly suit our needs.’

Robin said that him and fiancee Robyn had been drawn to the hotel for many reasons, including the extensive non-alcoholic cocktail list and selection of slushies.

‘Robyn had a nasty reaction to an particularly strong Archers and lemonade in 2007 so has avoided alcohol ever since. The fact that the hotel offered so many non-alcoholic options for her seemed ideal. We were both really looking forward to sampling the Paw Patrol Passion, the PJ Masks Mini Mojito and a really exciting one called Masha & The Bear.’

Another feature of the resort that appealed to the couple was a splash pool with slides. Robin revealed that following an incident in the swimming pool at his primary school he had avoided pools deeper than 58cm.

‘Despite my childhood fear of deep water I do still like to live life on the edge so the pirate ship with slide shown on the hotel website looked exactly like something I could let rip on’, Robin explained.

‘Just last year I appeared in an amateur production of Peter Pan where I played Captain Hook so it almost seemed too perfect that I could take that character with me into the splash pool.’

Robin’s excitement turned to dismay when he found the pirate ship was quite popular with children and he could barely get a turn, as it was constantly full of kids.

‘I thought I’d fit right in wearing my Captain Hook costume in the pool but in the end I just felt a bit silly. I also got quite a few funny looks from some of the parents there, although to this day I’ve no idea why’.

Pork In My Mouth

The couple were also attracted by the promise of regular appearances by Peppa Pig. ‘I absolutely love pork’, explained Robyn and assumed the references on the hotel website were relating to one of their speciality dishes of ‘Peppered Pig’. I love trying local cuisine and I was salivating at the prospect of getting some juicy pork in my mouth.’

‘Unfortunately all we got were some drama students dressed up as a family of pigs and having their photos taken with the never-ending supply of kids. How were we supposed to know Peppa Pig was some kind of kids’ programme?! It’s unacceptable and we were clearly mis-sold.’

Turning In Their Graves

The evening entertainment also proved disappointing to Robin and Robyn.

‘To me the term ‘game show’ evokes thoughts of Play Your Cards Right with Sir Bruce Forsyth or 3,2,1 with Dusty Bin and TV legend Ted Rogers.’

‘All we got were silly dances, kids marauding about the place like wild animals, and competitions for a pair of sunglasses. Bruce and Ted would have been turning in their graves’.

The final straw came when the advertised ‘Kids’ Club’ turned out to be a venue for children as opposed to the expected petting zoo.

‘Robyn loves baby animals, so the idea that there would be a place there dedicated to baby goats sounded amazing. We naturally assumed it was a clever play on words. It wasn’t. We were livid.’

‘Next time we book a holiday we will be a lot more careful and make sure we aren’t tricked by the devious marketing campaigns. If it said it was going to be packed full of kids we wouldn’t have come.’

‘How the hell were we supposed to know that Family Fun Time Resort would be a resort for families to have a fun time at?!’

‘It’s not like we’re against having a bit of fun. Robyn is part of a quite competitive chess club and I like to collect train memorabilia. But if we had wanted to spend our holiday in the company of feral children we’d have booked a week in bloody Butlin’s.’

The pair claim to have been left ‘apoplectic with rage’ and have already written a strongly worded letter to their MP. Tour operator TUI refused to comment on the allegation of misleading marketing.

Some of the above may not be strictly true! For more of the same click here.