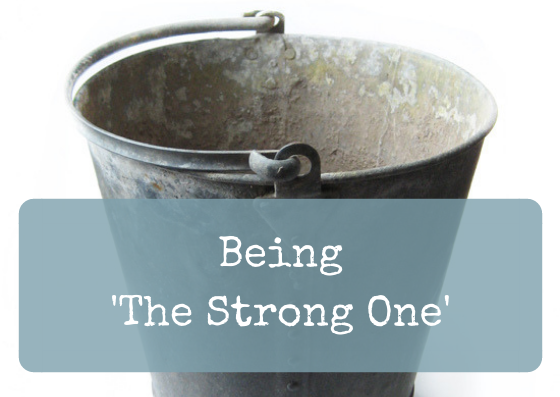 I’m generally seen as being the strong one. The one who doesn’t let things gets to them. The one that can keep calm under pressure without getting emotional or anxious or reckless. The one that can always be relied upon to find a positive, to stay optimistic, to be rational.

To be fair that’s pretty accurate most of the time. I can generally be pretty objective about things, almost detached at times. Some people may see this as me not caring, but it’s definitely not that. In fact I care a lot about things and people, to the extent that I’d rather be there to help them through things than dwell on things myself.

We learnt a lot about the change curve at work a few years ago and I do tend to move through it pretty quickly. The theory is that when something bad happens people move through the change curve, through shock, denial, anger, self-blame, depression, acceptance and finally to problem solving. I generally find myself getting to the acceptance and problem solving parts quicker than most people, which means I can then help out those stuck in the earlier stages a bit easier.

My natural approach is the shit happens, let’s stay optimistic, find a positive and crack on with it style. It’s worked pretty well over the years!

However, given I don’t tend to spiral into misery, panic about things and burst into tears at regular intervals people do tend to think I don’t feel things. Which isn’t strictly true.

I’ve been told in the past that I’m ‘dead inside’ or that ‘if I was any more laid back I’d be horizontal’. Neither of which are true, of course.

When I’m stressed or panicking about something you probably wouldn’t notice, because my brain is quietly plotting out 100 different potential outcomes and associated solutions. Solutionising (one of the most awful words in the English language!) and planning keeps me calm on the outside, but there’s always a constant stream of stuff going through my head.

We’ve also talked a bit about stress at work, and stress buckets, and release mechanisms. Some people have very small stress buckets so even the seemingly most trivial of issues sends them into a spin. Other people, myself included, have massive buckets where the stresses of the world, including those dumped in there by other people, just build up and up without ever quite reaching the top and spilling over.

Some people also have good ways of emptying their buckets so that the stress doesn’t overflow. Playing sport, listening to music, reading a book – that kind of thing. Mine is excessively loud dance music in the car, football, writing, and talking to certain people. For example, there’s a colleague at work who I can have a hot chocolate and cake with for an hour and a bitch and a moan and that helps relieve some of my stress. Sometimes just being around certain people makes me feel better.

I’m pretty good at not lashing out at people when I’m stressed I think. I’m much more the seething, passive aggressive type who thinks about shouting a string of expletives at you and reversing my car over you 17 times but never actually does it!

Although to be fair I’ve had a good rant at the people in the petrol station across the road from my office a few times recently, when they keep trying to tell me the pasty I’m buying isn’t in the meal deal. It’s in the meal deal fridge. It’s listed on the meal deal sign. IT’S IN THE PISSING MEAL DEAL 😬😬😬

So yeah, I don’t show my emotions that often (except when related to pasties or football) and I generally don’t get stressed that easily. I’m also fairly good at listening and don’t get annoyed and down about the small things (apart from poor usage of basic grammar!). Which seems to make me the strong one in people’s eye some of the time.

The one that people generally open up to and offload their worries onto. The one in the middle trying to see both sides of a story when people are slagging each other off. The one that ploughs on and keeps going however much they’ve got on their mind or however shit they’re feeling. Not better than anyone else, by any stretch of the imagination, just someone who deals with things a bit differently sometimes and doesn’t show his emotions as much as some.

Maybe one day I will stop being the strong one, lose the plot completely, have a breakdown and run down the street naked shouting random things at the moon.

But today is not that day.

Today I’ll be carrying on, doing what needs doing, keeping things inside and looking for the positives. If you look hard enough for them they’re generally there somewhere…