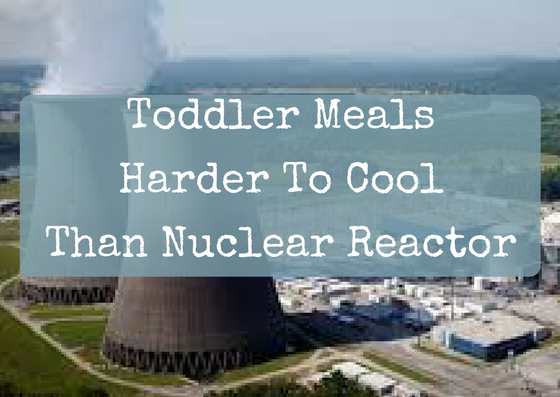 
Ready made meals designed for toddlers take more time and effort to bring down to a consumable temperature after microwaving than the core of a nuclear reactor does, claims report.

After a string of accusations in the national press that the sauce from a toddler ‘fishy pie’ was actually molten lava mixed with food colouring, researchers set out to investigate.

They conducted an extensive series of tests and experiments and found that meals took between 7 hours and 17 days to cool down to an appropriate temperature when left in their containers.

Quicker results could be obtained if the meals were subjected to the following after cooking :

We spoke to a few parents who used such meals on a regular basis. Mike Rowave, a dad from Slough told us, ‘I don’t find them to be a problem really. I take them out of the microwave about 15 minutes before lunch time and they are just about ready in time. Not for the same day obviously, but the day after next they are absolutely fine’.

Following the report, supermarkets are now warning parents not to expect to be able to consume the toddler meals on the day of cooking, unless they own an industrial freezer, have ready access to liquid nitrogen or live on a polar ice cap.

One thought on “Toddler Meals Harder to Cool Than Nuclear Reactor”