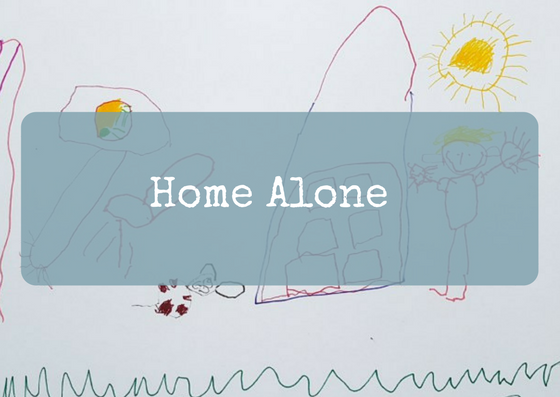 In which our reluctant hero tackles role reversal.

Apparently, being a modern dad isn’t just about going to work then swanning off down the pub until closing time, like in the olden days. If there’s enough time after doing the Shake and Vac and the ironing, we have to babysit the kids too.

Like Harrison Ford sitting in the cockpit of the Millennium Falcon, I went solo this week. Home alone while Mrs Babysatdad went off to work and down the pub. For three days. It’s like the 1950’s never happened.

I’ve been a dad for over four years so wasn’t phased by this. It can’t be that hard. Mums do it all the time. What could possibly go wrong?

Friday
I was up early and super organised with the day’s chores sorted before seven. Go me! After dropping the eldest off at her school nursery, it was time to have some fun with the little one.

I hadn’t been to a baby group for ages and it turned out that now the boy is nearly three, he entertains himself. As he couldn’t escape, I left him to it while I got stuck into tea and cake with the mums. I even managed to talk to an almost-grown-up person for a bit. I could get used to this.

I was one of about four dads swimming in a sea of mums and toddlers. Most of the others brought helpers but still look lost and awkward. All of the elements of the scene were present, but something looked wrong. Think Da Vinci’s “Last Supper” repainted with the disciples playing with iPhones.

Once the cake was no more, I rounded everyone up and went home for lunch.

We were left a brief to “make something for mummy” so spent most of the afternoon being creative. The eldest drew lots of family pictures, while the youngest tried the same but mostly smashed felt pens into the table. Dad, in a panic, started to write last Friday’s blog that he had forgotten to do.

Tea, bath, blog, and bedtime stories sorted, it was time to relax. Home alone? I’m not sure what all the fuss is about.

Saturday
I don’t recall rules one or two of the “Bluffers Guide to Parenting” but number three is to get enough sleep. I didn’t. D’oh!

I would have recorded “The Last leg” had I thought that the cats would be scratching the bedroom door at 5:15. Don’t they know that I have a twelve hour shift with no support from nursery or baby group today?

I’m slightly less tolerant than on Friday, so I opt to hide in the front room and wait for the caffeine to kick in while the kids finish arguing about which breakfast to have, who stands on the steps, which bowl to use, and what to watch on telly.

Bad weather meant that we were stuck inside with jigsaws. Predictably, most of the morning is spent sorting muddled jigsaw pieces, tipped out when I momentarily left the room to make a cuppa. Will I ever learn?

Tumbletots provided my first proper sit down of the day and the kids thought that driving through the numerous big puddles on the way home was hilarious. I ignored their tempting calls to drive down the wrong side of the road to even the splashes out.

Once home, the youngest put on a puppet show with the audience (The Gruffalo, Dolly Parton and me) served wooden birthday cake from the pretend party earlier.

If you’re interested, the show was Rapunzel (it always is) featuring the policeman from Punch and Judy, presumably there to investigate the false imprisonment of a princess. There’s more questions than answers in this story, trust me.

Spaghetti bolognese equals bath needed and I put new sheets on the littlest little one’s bed to replace the ones he wet on Friday night. Stories are a drawn out affair involving not listening and much messing as everyone is tired.

Stories done, there’s a loud shout before I make it to back down the stairs.. .

Of course there is.

This shouldn’t be a big deal, but solo parenting is starting to grate. The clean bed and ‘jamas from 18:55 made it to 19:12. Seventeen minutes. A new personal best.

I put the fifth load of the day into the washing machine and sit down at around eight. I realise that I haven’t spoken to an actual human being all day, asides from the lady in Codsall Co-op when the self scan didn’t work.

Knackered, I watch a film and go to bed.

Sunday
I’m slightly more awake after an early night and there’s a mere eight hours to kill before the cavalry arrives.

Things I miss as a parent, No 7 – Sundays.
Remember in the olden days when you could lie in, sup coffee and spend half the morning wading through The Observer on a Sunday morning? That.

Back to reality, we spend the morning playing board games, hospitals and making more pictures while the roast roasts. Having dished up lunch, I return to the dining room to find a new addition to the table. Glitter. About four tubs of it. It’s at this point I genuinely wonder why stay at home mums and dads don’t go mad sooner.

After a quick cathartic outburst, I clear up, muttering to myself like a sulky teenager throughout. We eat. Nobody dares move from the table until they have clean plates.

I calm back down watching Gnomeo and Juliet, as Sunday nap time is also Sunday movie time. By three o’clock the cavalry is on the bus. Hoorah! I remember that you can bribe kids with technology and let the eldest watch YouTube so that I can watch the match.

I hear the key turn in the front door. I’m being rescued! Hoorah again!

Normality restored, what did I learn? Although three days solo is doable and enjoyable at times, there’s a reason why I’ve never heard of any other dads attempting this challenge without jetting in the grandparents or a crack team of au pairs. It’s hard. Leave it to the pros, or at least remember that tablets can buy you half an hour off if you need it. And need it you will.

Over to you mum…

If you have been affected by any of the issues in tonight’s blog, please contact babysatdad via the usual channels.

This post was first published here. For more from Babysitting The Kids click on the work of art below or any of the recent links.