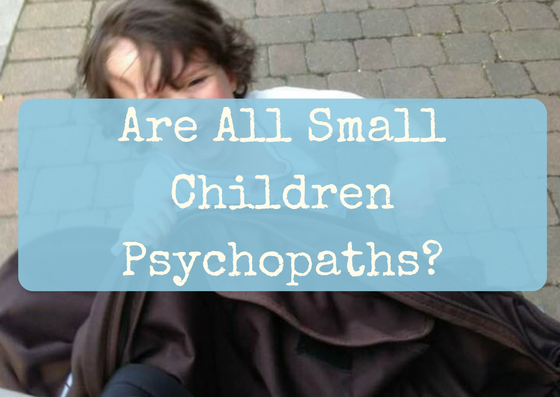 Here are some examples of why I think it’s possible that toddlers are in fact, just very small psychopaths. I’ve used some of the signs of psychopathy in adults…

Let’s face it – those little cherubs can be sooo charming when they want to watch Paw Patrol for the umpteenth time, turning on the soulful eyes and lisping “pweeeeees Mummy, a thousand times pweeeees” But you know the moment you refuse it’s curtains for you…

Rian, did you just write your name on the carpet with my lip gloss?! “No”

There is a base animal cunning that all the children I know have. This develops gradually, usually starting with asking Daddy for a biscuit when Mummy has just said no, denying they have just had a biscuit when they want another one, and developing into such exploits as dragging a chair to the cupboard to raid it for biscuits themselves while you are locked in the toilet banging your head against the wall due to all the endless biscuit demands.

LACK OF REMORSE OR GUILT

“Mummy, you are fat and your bottom smells” Thanks kid, you know that really hurts my feelings “I don’t care” Hmm.

This one goes without saying – the little buggers cost a fortune.

Anyone who has a small child knows full well they can go from zero to shitfit in 0.2 seconds (usually in the supermarket). It’s not just poor control – there is NO control.

One example: you give your child a lovingly cooked from scratch dinner. They eat it all, and claim it is delicious. Serve up a portion for lunch the following day and get treated like you have just presented them with a freshly microwaved dog turd.

Clearly when it’s said that parenting is the most important job in the world it really is – it’s the only thing stopping us being over run with Hannibal Lector and friends. What psychopathic things have your little darlings been up to this week?!

This post first appeared here. For more from Mumzilla, check out her blog!

One thought on “Are All Small Children Psychopaths?”