We’ve been planning to extend our house since before we even bought it. The fact that it had a bizarrely convenient 13ft side gap down one side of it was at least a moderate factor in choosing to buy it in the first place. That coupled with the desperation to buy somewhere from someone who actually wanted to move out of their house.

You see, we had nearly bought a more expensive house – the only, very minor, drawback was that the woman living there didn’t actually want to sell it and had an equal say in its sale with her ex-husband who had moved out and was desperate to sell it. Needless to say, 9 months down the line and having lost 3 of our own buyers due to the time delay, the woman in question was no closer to actually agreeing to move out and had instead managed to convince the courts that the price should go up by an additional £65,000 to what we had agreed on before she started pissing about.

It was an ever-so-slightly frustrating time, which only came to an end when we were told about our current house coming on the market by our own estate agents, given an exclusive viewing and bought it straight afterwards. It was slightly smaller than the other house, but had a potential for a side extension to make a family room. And given that we have more toys in our living room than the average branch of Toys R Us a family room sounded like a bloody great idea!

We got an architect in a few months after we moved in and he did some horrifically overpriced drawings, submitted it all to the council and had the planning approved after a few months of pissing about regarding some trees in our neighbour’s garden. Having managed to not get ‘stumped’ by the tree issue, we assumed the next part would be easy – getting some quotes from builders and getting the thing built. What could possibly go wrong?!

Well, it turns out that builders in and around the Reading area aren’t really THAT bothered about taking on new work. So the expected rush to give us a quote and the resulting bun fight over who we would pick to do it didn’t really materialise. Instead, from the 15 companies we contacted, only 4 even bothered to turn up to give us a quote – and one of those never actually bothered to ever send it to us!

Long story short, after just under a year of trying, we ended up with 3 quotes, each of which shared one overarching similarity – they were miles higher than we had expected! So instead of having everything done in our one storey side extension, we could only afford to get the structure done – the rest we will do ourselves over the coming months, or pay for bits as and when we can afford to. Fun eh?

Fortunately our builders have been generally great and did all the structural bits in 3 weeks – all we are waiting on now is the roof to be tiled over the next couple of days and it’ll be pretty much done! Even so, building an extension whilst living with a potty-training toddler has come with its fair share of challenges. Here are some of those challenges:

Joshua has wanted to help with literally everything

Joshua has wanted to climb literally everything

Whether it’s ladders, piles of bricks or half-finished walls he’s been desperate to get up them like a rat up a drainpipe.

Joshua had chosen his moments to need to use the potty

Clearly in all the excitement he has forgotten he needed to go on a few occasions, but on the ones where he has remembered he has had the tendency to urgently need one just as I’m somewhere where I can’t easily get to him. Like on the other side of a half built extension whilst signing for a delivery of bricks. There have been a few Colin Jackson-esque moments where I’ve hurdled part-finished walls in a desperate bid to reach him before it was too late. It’s never ended well…

Dust from building work is a necessary evil and spreads through the air like a cloud of misery, coating everything in its path. Whilst adults generally have the sense / restraint to not open doors into dust-covered rooms or to put on shoes before walking through visibly filthy areas, toddlers tend not to.

Discarded tools strewn across the garden

Builders have a tendency to leave things lying around each day when they go home. Whilst adults can generally resist the urge to pick up things like saws / pick axes / shovels etc toddlers are not so keen to leave them alone! It’s like a normal fun play time in the garden but with the slight thrill of having a toddler waving a mystery axe at you from time to time whilst running towards open holes in the ground. Quite a thrill I can tell you.

Builders seems to have a penchant for swearing. Our builder combines that feature with having possibly the loudest voice known to man. We assume he’s a bit mutton from years of lurking next to drills and diggers, but if he’s having a heated discussion on his phone with someone the entire street knows about it. In fact the phone itself becomes almost moot, given the person on the other end could probably hear him just as well without it. We are hoping that Joshua hasn’t noticed / heard the bad words, but have a sneaking suspicion his next nursery report will say:

‘Joshua is doing very well and his language is expanding quickly. However, he does seem to say ‘fuck off you fucking idiot’ rather more than one would expect from a 3 year old.’

As expected, there is a fairly regular background noise from the building works, which has intensified in the past week or so as they have been knocking down our internal walls. Whilst it has made our kitchen area look massive it has made listening to CBeebies quite a challenge. Whilst this is a good thing when Justin is on 17 times a day, it has made listening to Maddie Moate a bit of a challenge. Fortunately I have still managed to figure out that she is very excited about absolutely everything.

So there we have it. Having an extension designed, planned, priced and built is a massive pain in the arse, made all the more terrifying by having an axe-weilding, potty-mouthed, digger-driving, wee-machine in the house with you. Fortunately the end result looks like it should be awesome!!

At least the weather has been nice outside, so it’s not all been super stressful… 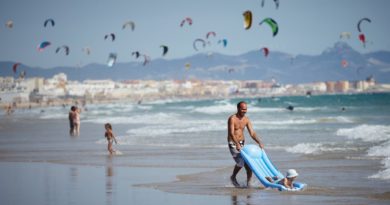 Everything You Need to Travel with Kids