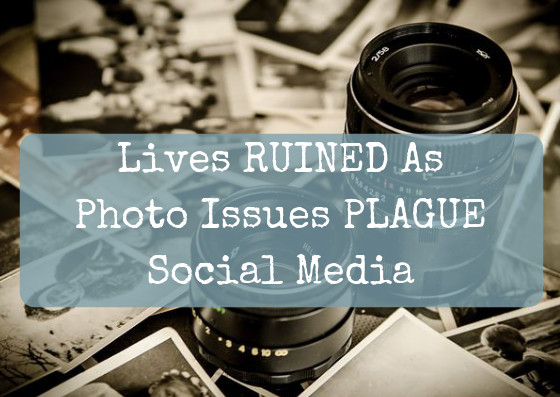 Prolonged issues with the ability to view photos on social media have had DEVASTATING impacts on the lives of MILLIONS it has emerged.

A crisis team set up by the government to REASSURE the public and seek MEANINGFUL solutions to the issue have been working AROUND THE CLOCK to tackle the calamity – with some commentators describing it as the biggest national disaster to hit the UK since Marathon renamed itself to the frankly ridiculous SNICKERS.

Billions of homes in the UK were affected for well over 12 hours, with social media giants such as Facebook, Instagram and Twitter refusing to show pictures posted by its users.

One of our readers, Trisha Fisher, a 32 year old mother of 2, reported being left ‘dumbfounded, shocked, scared and alone’ when the photo she took of her salmon and cream cheese bagel REFUSED to upload to Instagram. ‘I’ve been through a lot of hard times in my 34 years on this planet, but I’ve NEVER seen ANYTHING like THIS’ she said, as she struggled to compose herself.

Trisha made an emergency appointment with her doctor and has now been booked in for 7 weeks time. She told us she is ‘being strong for her kids’ and is ‘DETERMINED to get through it, one day at a time’.

Another reader, who wishes to remain nameless, spent the day unsuccessfully trying to send photos of his gentalia to strangers. ‘My Wednesdays tend to be spent picking people at random to send DMs of my PENIS to. But thanks to those absolute cocks at Twitter, there are 27 women who will not be able to revel in the pleasure of receiving my jubilant manhood in their inboxes today’.

Only known by the username @cock4days, the man revealed that this isn’t the first time he has had problems with Twitter. ‘The stupid thing must be down A LOT because I either get NO REPLY from females, or random messages such as ‘What the f*** is that thing?‘, which I assume means they have received a stupid grey box instead of my love TRUNCHEON.’

Other users were reportedly stuck in a loop for many hours, as they failed to fully comprehend what was going on. Bev and Dani, 23 year old twins from Stockport, were trying to have a chat about whether the animal Bev had seen in her garden was a fox or a squirrel.

HILARIOUSLY, Bev sent a photo of the mystery creature to Dani on Facebook Messenger, but all she received was a grey box. The fun CONTINUED when Dani sent a screenshot back to Bev to show that the picture hadn’t worked. Of course, Bev couldn’t see this screenshot, so herself took ANOTHER screenshot to show Dani the grey box that she had received. After a further 416 screenshots showing grey boxes the pair GAVE UP.

Dani later got up from the sofa and walked out into the garden herself and identified the mystery creature as a RING-TAILED LEMUR.

Finally, a WOMAN from Chiswick told us that the social media photo blackout had been causing real problems for her too.

‘A gentleman friend and I like to exchange some RAUNCHY photos during our days off together and today was as good a day as any for a bit of a private show. However, instead of receiving enticing photos of his BITS and PIECES all I was left with was a sad, lonely empty box. We tried Facebook messenger, Twitter and WhatsApp, all to no avail. We even tried SnapChat for a few minutes but sending cute pictures of our avatars to each other wasn’t quite cutting the mustard.

In the end we gave up and had a conversation about what our favourite dinosaurs are instead. I ALMOST resorted to having sex with my husband to relieve the tension – that Zuckerberg bloke has got a LOT to answer for.’

It is hoped that the photo blackout will be fixed overnight, so users can once again begin sharing photos of their dinners, activewear, kids, misspelled party banners and gentalia, in the morning.

The crisis team recommend that if you have been AFFECTED by this horrific incident you could always SHOW YOUR WARTIME SPIRIT and try one or more of the following:

We’ve also included a handy infographic below to show other ways of surviving the crisis: