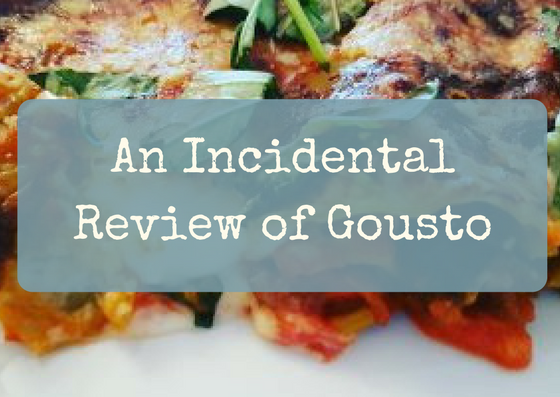 When the wonderful, benevolent and good-looking* co-owners of You Have to Laugh asked me if I would review a Gousto box, I jumped at the chance.

I mean, free food, I’d be mad not to! I had heard of Gousto along with other Meal Kits on the market but hadn’t actually tried any. A friend raves about them but I always thought they were a bit on the pricey side.

Armed with my voucher I went onto the website. Now, I’m a veggie – don’t judge me – and I ordered my box on a Wednesday for delivery on a Saturday. At the time of ordering there were only two veggie options left which was a shame as there were some corkers that I would have liked to try but I ordered the two available:-

Monsieur Incidental is NOT a veggie so I hoped they would be tasty enough to keep him happy (a tall order indeed). He is also no chef, not by a long chalk, so it was my plan that we could cook together with the aim to encourage him in the kitchen.

On Saturday morning I received a text from Gousto advising me that the box was on its way and with tracking information. It was due between 11am and 1pm, it arrived at noon. Great service!

I opened the box, I thought on the whole it was good quality.

The aubergine was a bit bruised (oooh, matron) and a tomato had split but other than that it was all present and correct. I was probably more excited than a woman of my age should be about the wooden spoon. It was all put to one side until that evening when we decided we would cook the lasagne.

The recipe is very easy, everything has been pre-measured for you.

You only need to add a couple of ingredients that you are likely to have in the cupboard like flour, butter, olive oil, salt and pepper etc.

The only thing we did find was that the recipe shows the quantities for meals for two and four people and we occasionally used double in error (like the water that was added to the ratatouille that was hastily drained!). To be fair it is quite clear and we were probably just being daft. Monsieur Incidental was in charge of chopping (what is it with men and knives?) and even he didn’t fuck it up so I’d say it’s fairly easy. Although I may have pointed him in the right direction once or twice “No, Dear, cut the courgette lengthways first”.

Chopped vegetables, since you asked

We managed to make the whole thing without coming to blows, which in itself is a minor miracle, and popped it in the oven.

Half an hour later it was ready – happy days! We cracked open a bottle of Prosecco and were very happy that there was enough for both of us and our two children aged 5 and 1 – food, not wine, obvs.

It was really tasty and I will definitely buy the ingredients to make it again.

On Sunday we were a bit pushed for time, I felt like crap and Little L was being a pain in the arse so I made the taquitos by myself while Vince was in charge of Screamy McScreamerson. These were really easy to make, I make quesedillas and these are fairly similar. 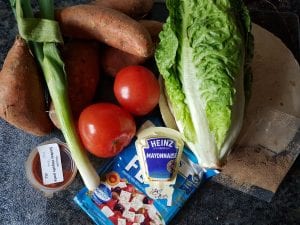 Again there was enough to feed all four of us and they were well received by all.

In summary I would say that the meals are delicious, easily feed AT LEAST two adults with no need for extra salad etc, having said that I wouldn’t purchase them at full price as I could buy the ingredients for a lot less, especially as it was literally just vegetables – I wonder if the meat versions are better value for money? However they are good for someone who cannot cook to save their life and helped us be a bit more adventurous.

Thank you to Gousto, who supplied the box for free for the purposes of this review.

If you fancy trialling a Gousto box, you can check out their website here. They regularly offer money off a first box, so it’s definitely worth trying out!

*Thanks Erica! It means a lot.